The making of "In the Company of William Byrd" 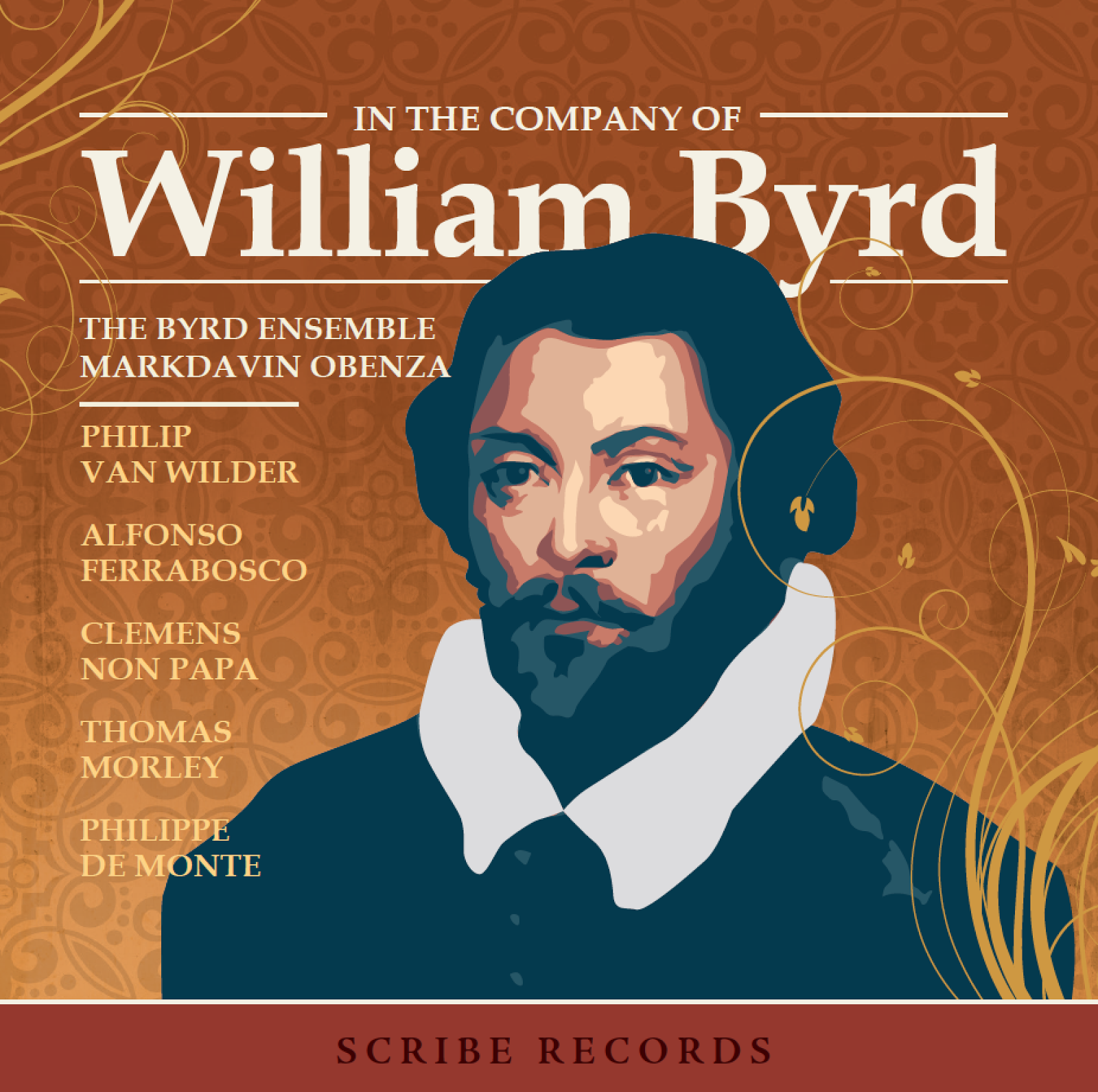 We just finished our 2nd CD, In the Company of William Byrd, and I'm pleased to say that it's our best CD yet. Byrd Ensemble has been very productive, releasing two CDs in just over 2 years, thanks to the generous support of Nicholas J. Bez.

CD Concept
Our  last recording, Our Lady: Music from the Peterhouse Partbooks, received a lot of press, in part, no doubt, because it features mostly world-premiere recordings - reconstructed music by eminent scholar Dr. Nick Sandon. We wanted to follow up that success with another early music CD by William Byrd, my favorite renaissance composer and BE's namesake. That decision also reflected our mission to be known primarily as a renaissance vocal ensemble. For our next CD, we plan to change gears and record music outside the renaissance period.

There were some problems totally committing to a Byrd CD. Byrd is a well known composer and all his music is already recorded by very good English groups like Cardinalls Musick, Tallis Scholars and others. It felt like a waste of money to repeat what was already done well. Luckily, while we were still brainstorming repertoire Joshua Haberman (Byrd Ensemble alto and sound engineer of Scribe Music, LLC) sang a concert with Capella Romana where he met Byrd scholar Kerry McCarthy, also singing on the same program. Kerry kindly agreed to work with us and provided the unique concept of recording a CD of Byrd and his personal contemporaries.

Once the tracks fell into place we had to think about voicing, always a tricky process.  To overcome challenges, we tried to avoid too many high tenor or low alto parts since there aren't very many of those singer types in Seattle familiar with the repertoire.

Graphic Design
Roslyn Hyde is the wonderfully creative graphic designer for Scribe Music, LLC. She has never yet failed to produce just the right design. We wanted the CD cover to be similar to a magazine cover - a main subject with overlaying text, all in front of a textured background for a sense of dimension.

There aren't many pictures of Byrd that survive which means the same one gets used over and over.  We wanted ours to stand out so Roslyn created an Obama campaign poster styled image of Byrd.

Rehearsals and Recording Sessions
Our budget ($10,000) allowed us to scheduled one rehearsal ($75 per singer) and four recording sessions of 3 hours each ($50/hour per singer). We scheduled the sessions and rehearsal close to each other and to the concert where we performed this music. It was a small miracle that we were able to do this, given how busy the singers were at that time. I use rehearsal time to make sure all the parts are covered and that I have a sense of the tempo and shape of each piece.

With that exception, there is a beauty in two-on-a-part singing that we try to capture in our performance and recordings through perfectly unified singing - it is part of our signature sound.

We hire singers with very specific skill sets - pleasant sound, solid sight-reading ability, good ensemble singer (can sing well with others) and clean execution, in that order. In a recording, volume is not nearly as important as tone and clean execution. There are ways to adjust balance by moving the mic relative to the singer or vise versa. 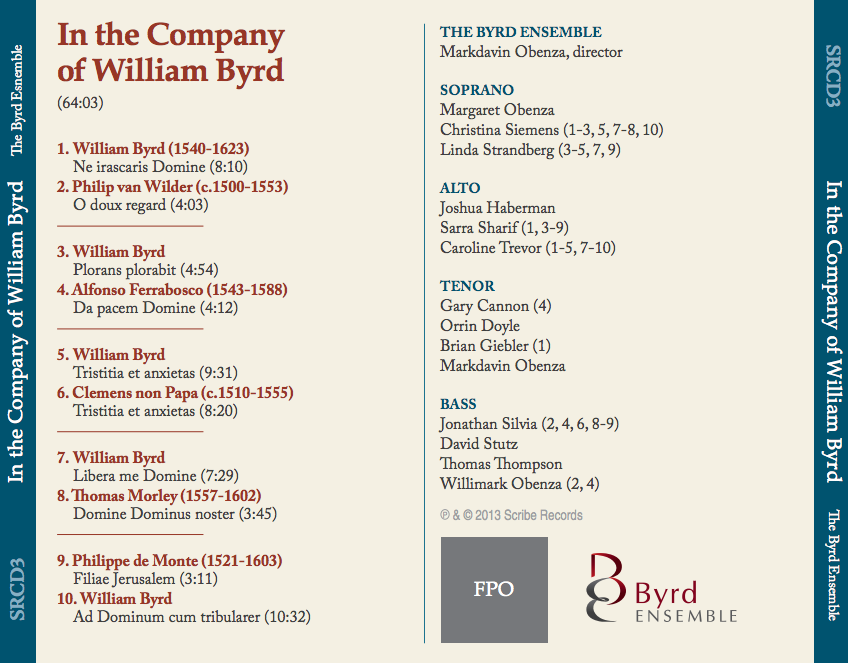 One notable singer on this album is alto Caroline Trevor, who sings regularly with the Tallis Scholars. Since this album required low altos, and since Joshua Haberman is our only low alto, we hired Caroline and brought her all the way from London to sing with Joshua. Caroline is a first rate singer and was an absolute pleasure to have on this album. 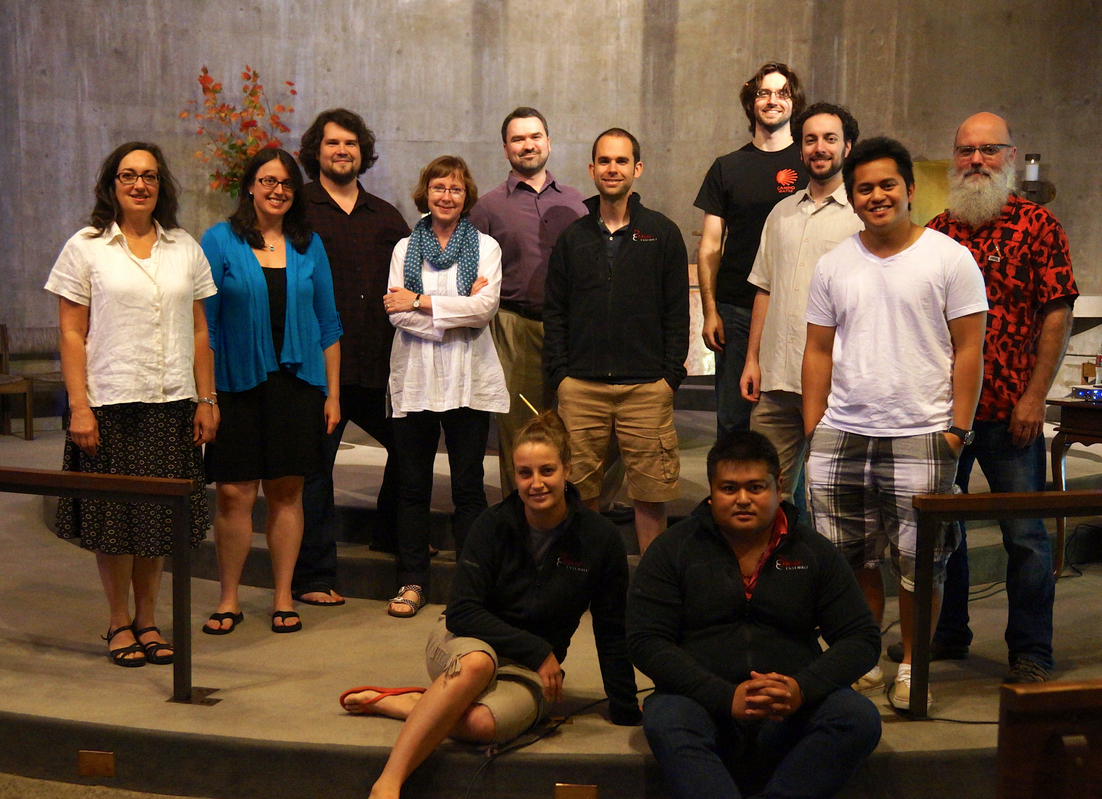 
The space
Finding the right recording space is also very important. Christ Episcopal Church in Tacoma, WA, has a great balance between clarity and reverb. There is also some wood in the room which adds warmth to the sound. Other than the wood cracking as the building heats up, the noise floor is also pretty low. It's important to have a low noise floor so the exposed moments (like one part singing quietly) are not clouded with a hiss, air or outside noise.

Recording equipment and setup
Scribe Music, LLC, an independent record label managed by Joshua Haberman (Sound Engineer) and myself (Producer), produces Byrd Ensemble recordings. We used two Sennheiser MKH8020s mics that were placed just a few feet away from the singers. Mic placement is crucial. You want to place it close enough to get enough presence from the singers, but far away enough to get enough room sound or reverb. It is always best to err on the side of having the mics too close rather than too far. It is much easier to add reverb in post production (though not ideal) than adding "presence."

We had some unforeseen difficulties. We noticed that we were picking up a digital popping noise. It took some serious troubleshooting to figure out that one of our mics was not working properly. Luckily our mic dealer was local and provided us with a replacement for the remainder of the recording sessions. 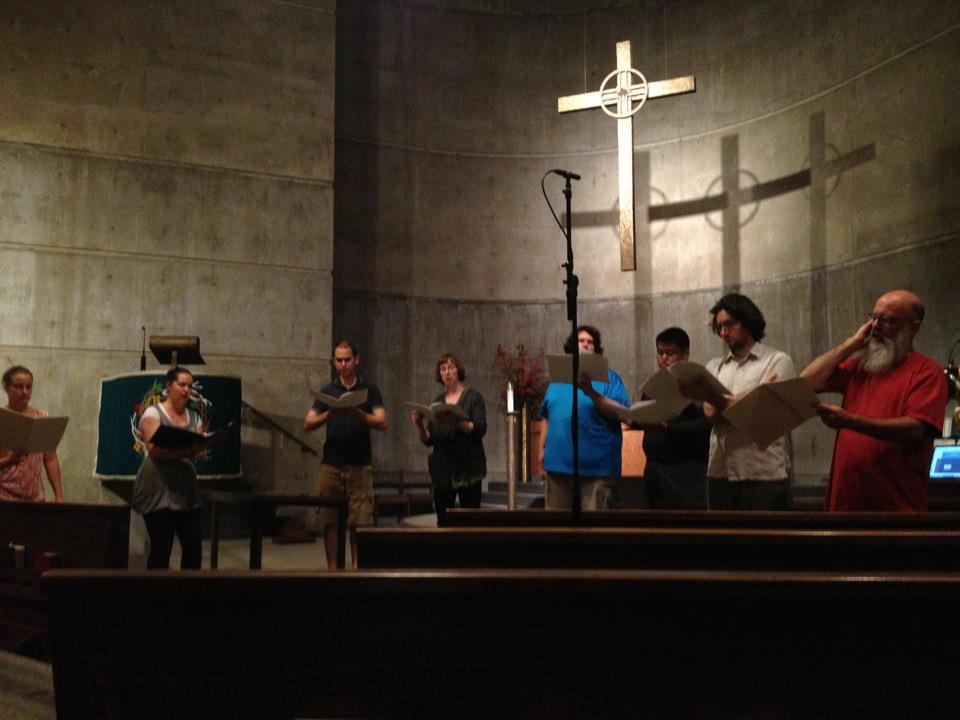 We did make one adjustment we made from our last album regarding mic placement - we moved the Sopranos a little further away and the Basses a little closer to the mics.  Mics pick up Sopranos very easily and we wanted a less top heavy sound.

We recorded directly to a mac laptop at 96k/24bit.

Execution
The better the raw material is, the better the outcome. On this CD, we recorded at least 4 good takes of each section (about 2-3 pages). We had to pace ourselves so the singers could maintain a healthy sound through the entire 3-hour session. Our toughest day was on a Saturday when we had two 3-hour sessions with a 2-hour break in between. It was hard work. Our altos were expected to sing in both extremes of their ranges, so we scheduled the low pieces first.

Like in performances, singing in tune is important, but not as important as being internally in tune. Meaning, if the group shifted up or down slightly in pitch, I would adjust that in post production, though only if the group was in tune with each other. If things become more than a half step off (which thankfully never happened on this project), then we would reset. A half step or more difference can become vocally difficult to manage for some singers.

We always need a few extra takes of beginnings and ends of pieces or sections, as they are more exposed.

I was the producer, so I was responsible for running the session, giving notes on what to improve, as well as singing.

Challenges
We are used to performing in a dryer space, Trinity Parish Church in Seattle, WA. Trinity may not be as reverberant as Christ Episcopal Church, but the dryer acoustic makes it easier to hear each other, which in turn makes it much easier to sing together.

Communicating tempo and feel is very difficult, but very important to get right. Subtle tempo adjustments can change how each phrase is expressed, thus affecting the overall feel of the piece. I feel that it is most always best to go with the group's natural tempo. There is nothing more challenging than editing together takes that are in vastly different tempos. Getting a consistent tempo is slightly more important than getting the right one.

Editing
After all the music has been recorded, the grueling editing stages begin. I edit on an iMac using Logic. I listen on a pair of M-Audio monitors, Beyerdynamic 350 headphones and, which may confuse some audiophiles out there, and my iMac computer speakers. What one listens to the music with does affect their listening experience. Different stereo systems, headphones, monitors highlight different imperfections. The iMac computer speakers are the most brutal. Nothing sounds good through them so I can hear every imperfection really clearly. This makes editing easier but it can be demoralizing. I review every selected take (and edit) on my studio monitors (with a flat frequency response so every frequency is accurately represented) and then with the Beyerdynamic headphones, which are also designed to have roughly a flat frequency response.

One particular software I find to be incredibly useful is iZotope. This program removes most of the digital popping I mentioned earlier that one of our mics was causing as well as room cracks, trucks going by and much more. It works like magic and I highly recommend this program to anyone that needs to clean up noise.

I make about 3 drafts before submitting the final, which are listened also on several stereo systems - car, home, computer, monitors and headphones. If it's going well, it takes me one hour per minute of recorded music to edit and master the CD.

In the Company of William Byrd will be released on February 9, but is available for purchase here.
Posted by Markdavin Obenza at 11:41 AM