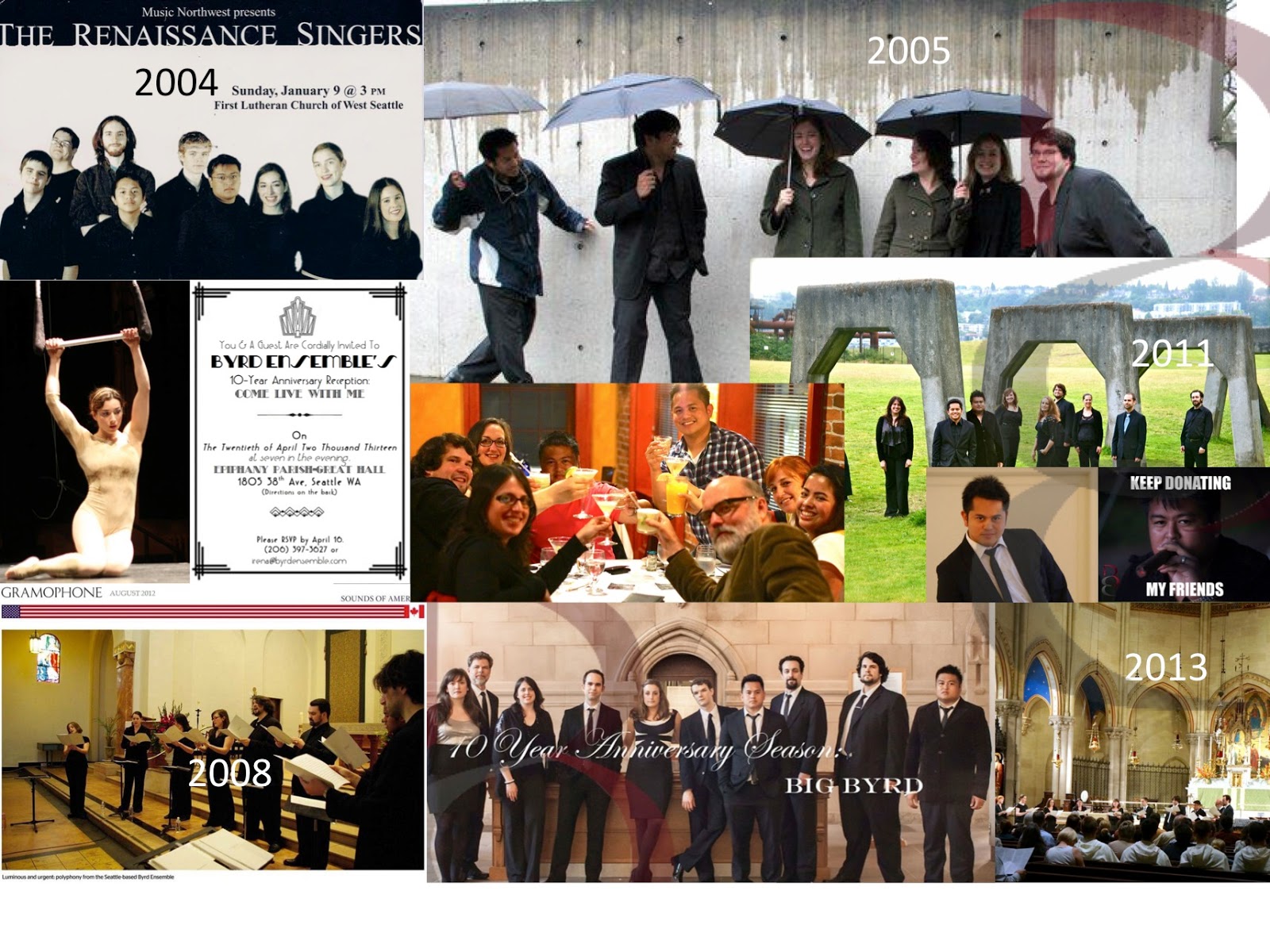 I'm feeling a little nostalgic thinking about the last 10 years of singing and directing the Renaissance Singers, now the Byrd Ensemble. Here's what we started with, the very first recording we ever made in 2003 of Pearsall’s Lay a Garland. [No laughing!]

Orrin Doyle, Thomas Thompson and I grew up singing together in the Northwest Choirs. Soon after high school, we joined the Compline Choir and eventually the Tudor Choir.  We wanted to sing more often so we recruited some friends for a friendly sing once or twice a week at First Lutheran Church in West Seattle - a small, but lovely space. It became serious when Jane Hardy invited us to perform on Music Northwest, a chamber music series she manages.  We formed a group of 10-12 young singers, most of us in our late teens and early twenties (in the audio clip), and rehearsed twice a week for a year to prepare this program (that's over 100 rehearsals!). We gave our first concert as the Renaissance Singers to about 150 of our closest friends and family in January 2004. [I will not forget when we chose "The Renaissance Singers," Orrin and I met at SAMS (now Eastlake Bar and Grill) behind Thomas Thompson's back so we couldn't be argued into calling ourselves something like antiquo vocalis or mensura polyphonico... After many rum and diets, the Renaissance Singers was the best we could do - bland, but straight forward.]


This concert probably wasn't very good, but it was a good start. The experience, most importantly, ignited a deep passion for vocal chamber music - a passion that will sustain us for many years to come. This has been an enormous group effort and I am so thankful for how supportive the core members have been.

After our first concert in 2004, we became a part of an educational program sponsored by the Tudor Choir for our 2004-2005 season. In 2005-2006, we were incredibly fortunate to add staple members to the group - Joshua Haberman, Sarra Sharif and Margaret Obenza (now my wife who I met on the Tallis Summer School course in Seattle). In 2007, we became a nonprofit organization. 2008-2010 was a period of transition as we fine tuned our aesthetic and personnel. Our 2011-2012 season was a milestone. We released a new CD produced by a record label that Joshua Haberman and I started, Scribe Records which has been positively reviewed in several publications - Gramophone, Early Music America and Early Music Review. We also went on our first tour to the East Coast with guest conductor Peter Phillips from the Tallis Scholars.

The real reason behind the name change (2011)
We anticipated that our CD release, Our Lady, might be well received. We asked some members of the early music community in England if they would be interested in the release and found out about, "The Renaissance Singers," a chamber early music group started in 1944. We were worried their director would not welcome a CD release by another group with the same name and we didn't want to get mixed up with them, so we changed our name to the Byrd Ensemble. [Funny thing, this decision was also made sans Thomas at the Matador bar in West Seattle.]

Onward
Now we present a subscription series, produce a new CD annually, and are touring every other year. Since June 2013, we've toured the East Coast and produced 2 CDs. We are looking forward to our concert season which features a massive 60-voice piece and ends with Handel's Dixit Dominus performed with the Seattle Baroque Orchestra. 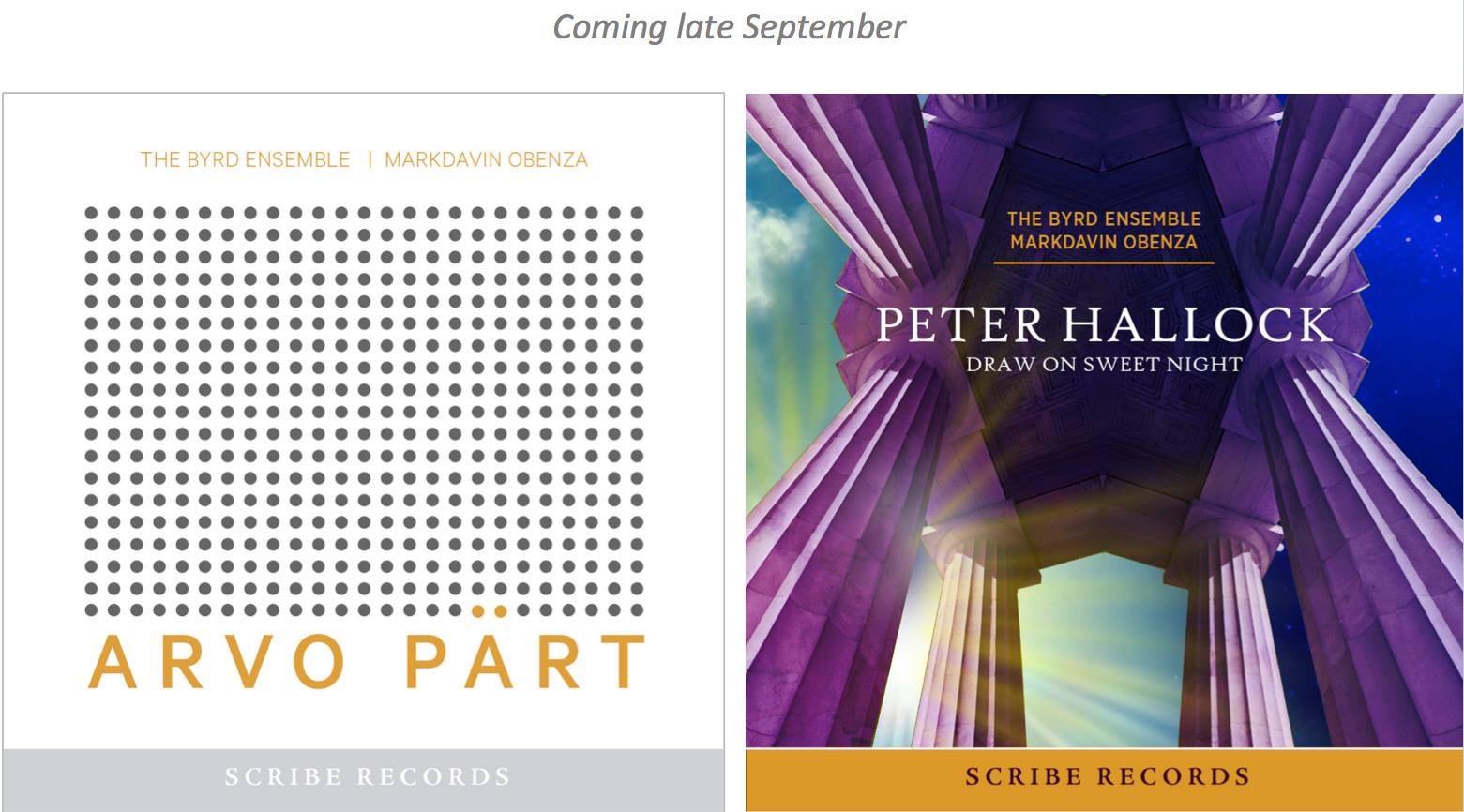 We are thankful for our supporters. Nothing is more encouraging than feeling like people care about our work. We have a small (but mighty!) following that has been incredibly supportive through the years, we thank you! We hope to see you at our opening anniversary concert on Sat Sept 28.