With the help of a generous donor, Scribe Records and the Byrd Ensemble were able to produce two recordings of two mystics – Arvo Pärt and Peter Hallock.

EQUIPMENT UPGRADES
Around the time we decided to record both CDs, Scribe Records (an independent record label managed by Joshua Haberman and myself) was testing new equipment. Scribe recorded its last two CDs, In the Company of William Byrd and O splendor gloriae, with two Sennheiser MKH8020s omnidirectional microphones. We are always interested in improving our sound and were given a recommendation to try out ribbon microphones. We got a hold of a few test mics and scheduled several test recording sessions (with a few singers who graciously donated their time) and tried out the mics and preamps.

Audio samples from the test sessions:

We found that the Royer ribbon mics captured an amazing stereo image (you can really hear an arch of singers in front of you) and a natural warmth that was absent in our previous two CDs. Another huge benefit of ribbon mics is that they do not capture room noise as loudly as omnidirectional mics. Omnis pick up everything, even quiet low rumbles sound like there is a jet engine nearby. We chose the Royer SF-24 - it sounded the most natural and uncolored.

Another benefit of the Royer SF-24 is that it is "active," meaning that it contains a built-in power supply which allows us to plug it in to any preamp (a preamp is responsible for boosting the signal picked up by the mics). Passive ribbons require a special preamp because they record at a very quiet level.

We ran the Royer SF-24 through the Rupert Neve 5024 preamp, which added even more warmth, particularly when the singers sang more loudly. At no point did we want our sound to be harsh and/or brittle.

In anticipation of our large session with brass, organ and percussion, we also upgraded our interface to the Apogee Symphony, which has more channels for all those extra mics we would need.

We were unhappy to discover that ribbon microphones are very susceptible to radio frequency interference (RFI). Local station KUBE 93.3 was picked up loud and clear in my house, and other radio stations were picked up (although faintly) at St. Mark's Cathedral and St. Joseph Catholic church. We found that the best way to minimize or get rid of RFI is to reposition the mic up or down. We definitely didn't want R. Kelly or Jay Z to make the album!

Another disadvantage was that ribbon mics make more "self" noise than omnis. The Sennheisers we used on our previous CDs are extremely quiet. Also, the new Apogee Symphony interface has a built-in fan that comes on frequently - and audibly - to cool the unit.

I was first drawn to Arvo Pärt’s music in 2001 when I first heard the Pro Arts Singers’ (directed by Paul Hillier) recording of I am the true vine. We’ve kept Pärt’s repertoire in our rotation since 2009, and were particularly motivated to record it after discovering a few fantastic low Basses - a necessity for many of Pärt’s works.


The Pärt CD features, in my opinion, his best works for choir. The Seven Magnificat Antiphons and the Berlin Mass are the main pieces on the CD.


There are two settings of the Berlin Mass - one for 4 soloists and organ, and another for chorus and strings. Originally, I wanted to record a version for SATB soloists and chamber strings which I proposed to Arvo Pärt himself. He wrote back saying that he actually liked the idea, but needed to approve a sample recording. Ultimately, I had to ditch this idea because it would have been cost prohibitive to produce.


We chose to record the Pärt pieces at Church of the Redeemer in Kenmore, WA. The room gave us a clean and balanced sound (though we did get a lot of traffic noises - especially during rush hour). We setup the ribbon mic in the center (as you see in the pic) favoring slightly more towards the basses (far right) and set up the two Sennheiser omnidirectional mics about 3 pews back.

It took a total of thirteen and a half hours (in four 3-hour and one 1&1/2-hour sessions) to finish the Pärt CD. Organist Sheila Bristow played brilliantly on the Berlin Mass.

Peter Hallock served St. Mark's Cathedral as organist and choirmaster for over 40 years and was key to bringing about a renewed interest in the Compline service. The formation of a chant study group eventually became the famous Compline Choir who has, since 1956, sung Compline every Sunday evening in the lush acoustic of St. Mark's Cathedral. It was in this group where many local singers (myself and several others in the Byrd Ensemble, included) have connected and have been inspired to form choral groups.

Joshua Haberman and Jason Anderson collaborated to select the music for the Hallock CD which is made up of never-recorded anthems and beautiful Compline Psalms. 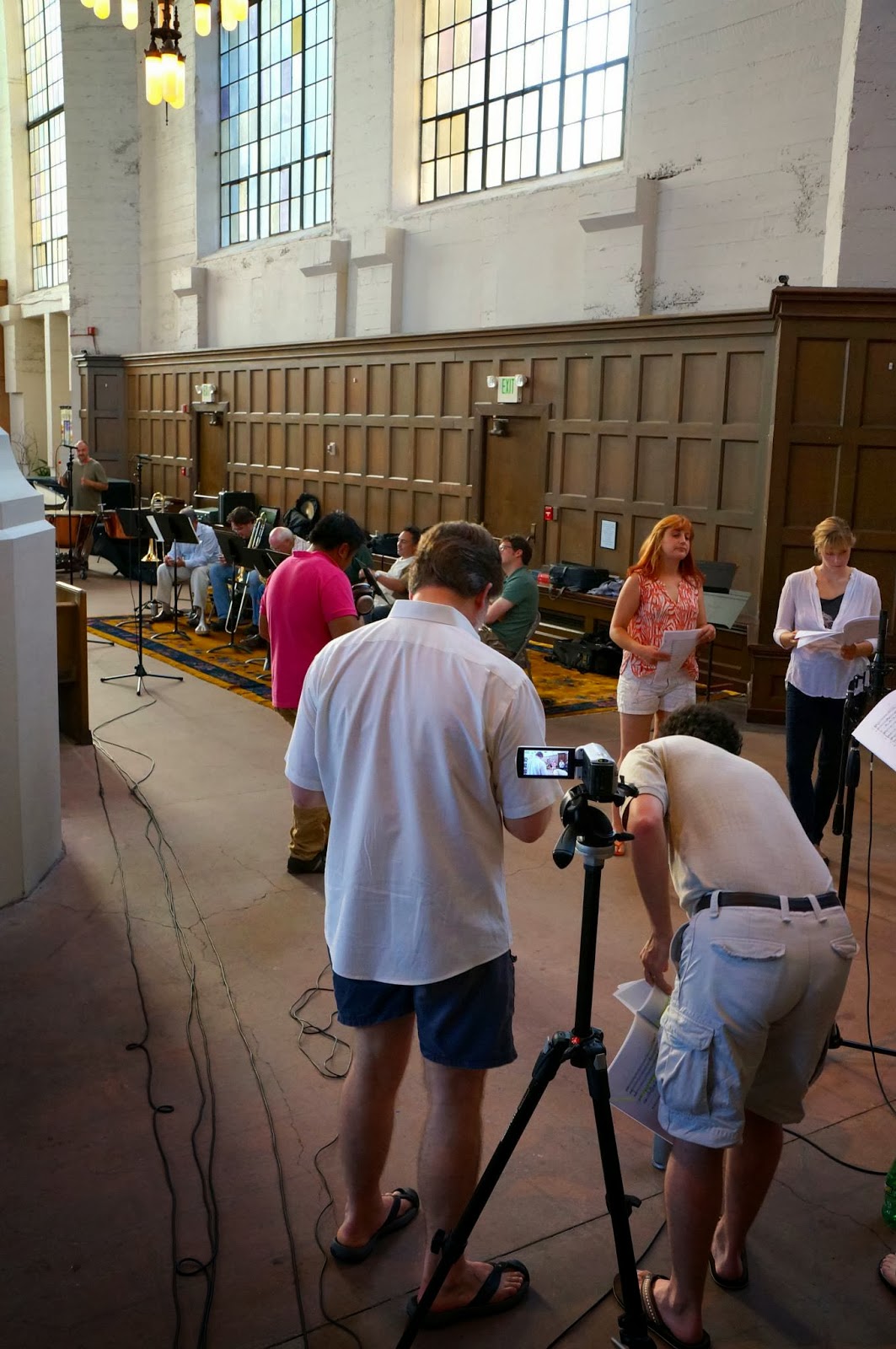 Recording the Compline Psalms at Church of the Redeemer was straightforward, but recording the larger-scale anthems at St. Mark's was not. For Ye Choirs of New Jersusalem and Victimae Paschali, we wanted to place the brass, choir and percussion in a way that gave us enough isolation in post production so that we could control the volume levels of each group independently while being close enough to maintain togetherness is such a wet space. We placed the choir in the "Compline corner", brass to the left, and percussion to the left of the brass (above). 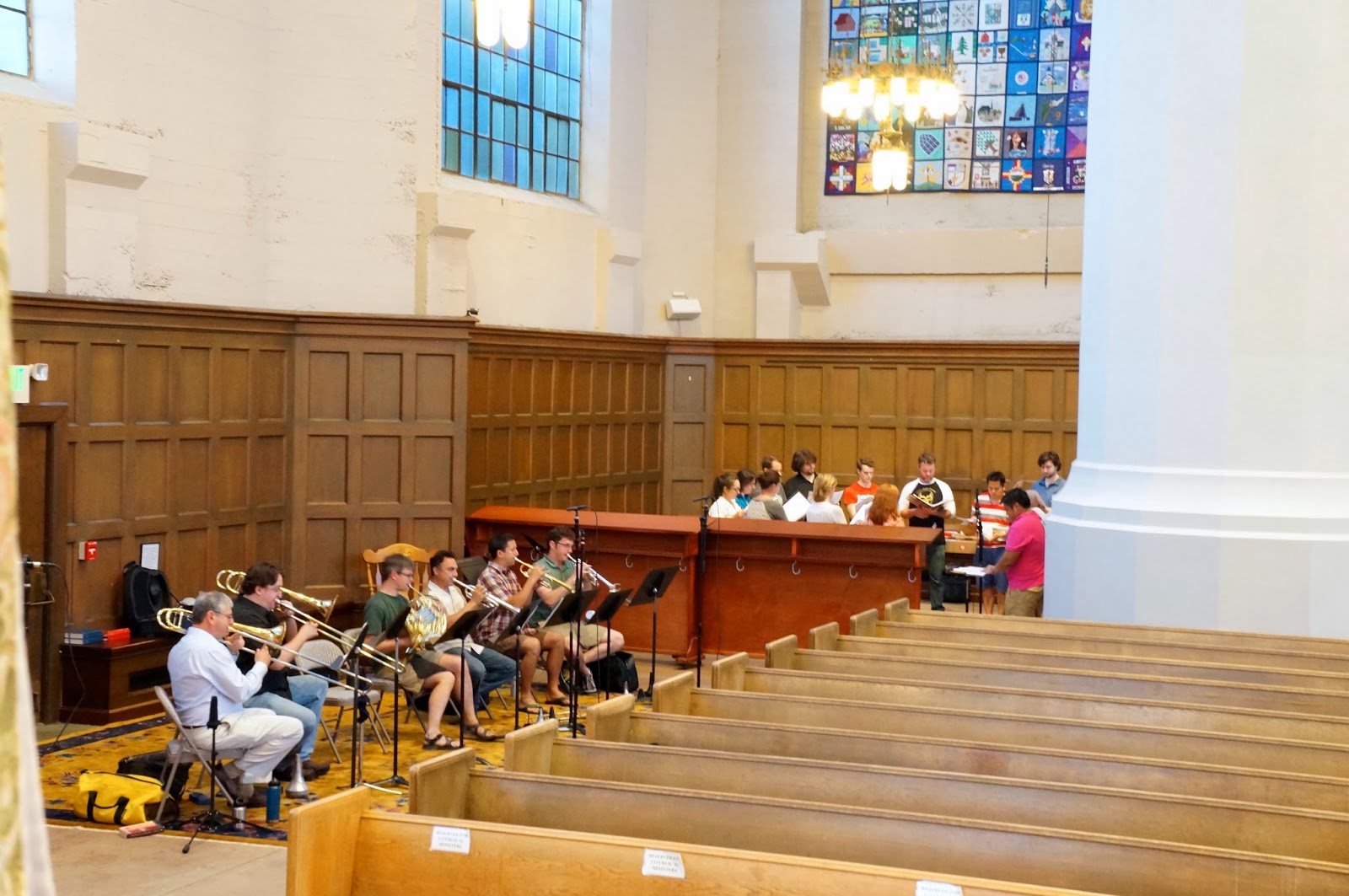 In order to capture a more detailed organ sound, we moved St. Mark's existing mics closer to the organ. This required me and Josh to climb up to the ceiling of St. Mark's via a very tall and scary ladder to reposition the mic cables.

We finished recording both CDs by the end of June 2013 and needed to submit both masters by the end of August in order to meet our September 28, 2013 deadline - the opening concert of the Byrd Ensemble's 10 year anniversary season. That gave us only 2 months to edit and design both albums.

We used two pairs of mics to record the Pärt CD (two omnis and the ribbon mic in front (one unit housing two mics). We intended to use the omni pair to capture the reverb at Church of the Redeemer, but we found that it picked up too much room and traffic noise. We ended up not using the omnis and added reverb to the front ribbon mics. We used the reverb plugin Altiverb. This plugin is great and has a feature that allows you to record the reverb of any space to use as a reverb setting. This process involves recording a sine sweep in the space and uploading the recording into Altiverb. Josh recorded the reverb at St. Mark's with the intention of applying it to the Compline Psalms (recorded at Church of the Redeemer), but he ended up using a customized reverb setting on Ambience instead, another reverb plugin.

For the Arvo Pärt CD, I pasted together the best of the raw material using Logic 9, a digital audio workstation for mac.

For the Hallock CD, I edited the drafts and Joshua Haberman made time adjustments (shortening and lengthening music) to the Compline Psalms in order to replicate Peter Hallock's unique psalm aesthetic. (Josh occasionally sings with the Compline Choir - so it's all relatively fresh in his head.) Josh also chose the reverb settings for the psalms and the title piece, Draw on sweet night.

Roslyn Hyde designed the artwork for both CDs.

We went through A to Z Media, a CD manufacturing company to replicate 500 CDs of each album. They are a very affordable company (with a branch in Portland, OR) and the printing quality is good. The turn around time is about 3-4 weeks.

Once we received the CDs, we set up physical and digital distribution through CDBaby, an online store specializing in the sale of CDs and music downloads. They provide an easy and affordable way to get digital media out to iTunes, Amazon, etc, and physical CDs to some brick-and-mortar stores. We also set up an account with Amazon so they can fulfill all physical CD orders for us. We send a box of CDs to Amazon's warehouse and they take care of reporting sales tax, shipping and do a great job attracting potential customers to our products. We only make about $13 per $20 CD, but the convenience is worth it.

This was probably the most exhausting recording project we've ever done. It's a true test in psychological and emotional stability when focusing on the imperfections, not to mention the added pressure of a quickly-approaching deadline. It required countless hours of editing, listening and producing over the course of a few short months. This might have been easier to handle if we had a later release date, but I believe timing is everything and I see these recordings as a success. (I say get it done or else someone else will!).


Many thanks to the singers that participated, you are world-class ensemble singers. Special thanks to Joshua Haberman, my business partner and friend, who was also key in producing what I think is our best work yet.