St. Mark's needed an acoustic shell, so we built one. 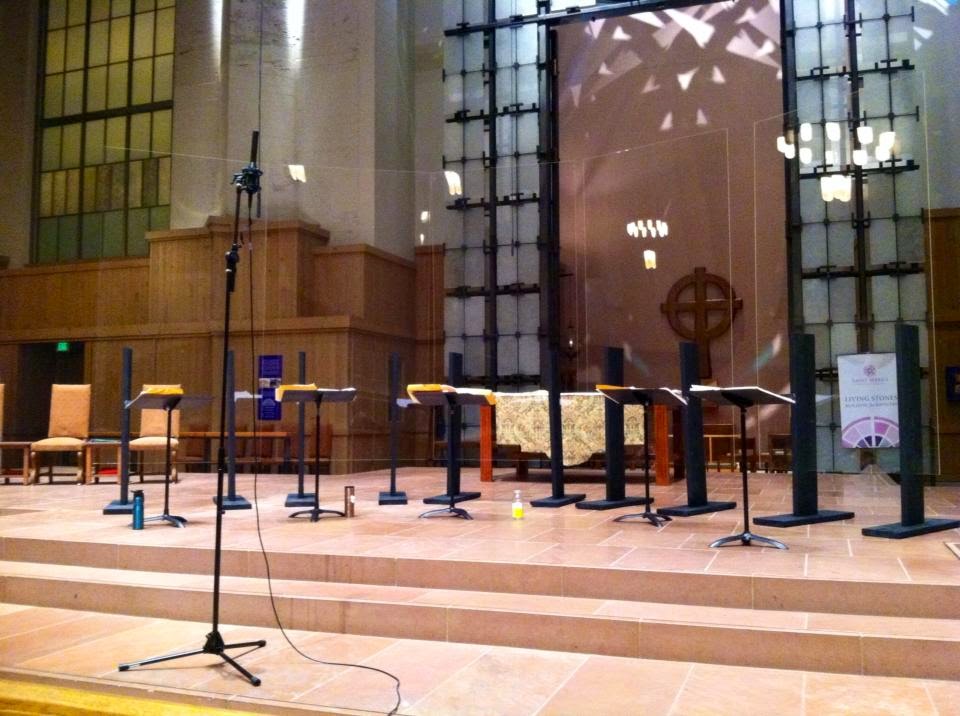 The need was apparent after Byrd Ensemble's performance of Handel's Dixit Dominus with the Seattle Baroque Orchestra in March. The detail was lost in the room and the singers had to compensate by singing their heads off. It was a little disappointing, especially because St. Mark's is a fantastic venue in other ways. It has that mystical, otherworldly aura that complements our music so well. Oh, and it has PARKING. 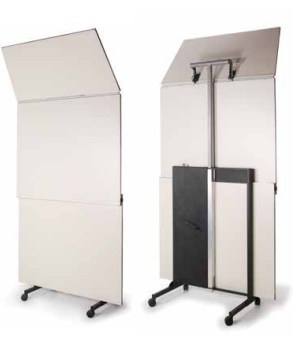 Now that we are an artist-in-residence at St. Mark's Cathedral, we were determined to improve the sound for our upcoming concert season. We first looked into renting a shell. No luck. Apparently people are very protective over their precious acoustic shells. I suppose I would be too at a cool $7,000 a piece from the Wenger Corporation. No thank you, and, your shells are ugly. 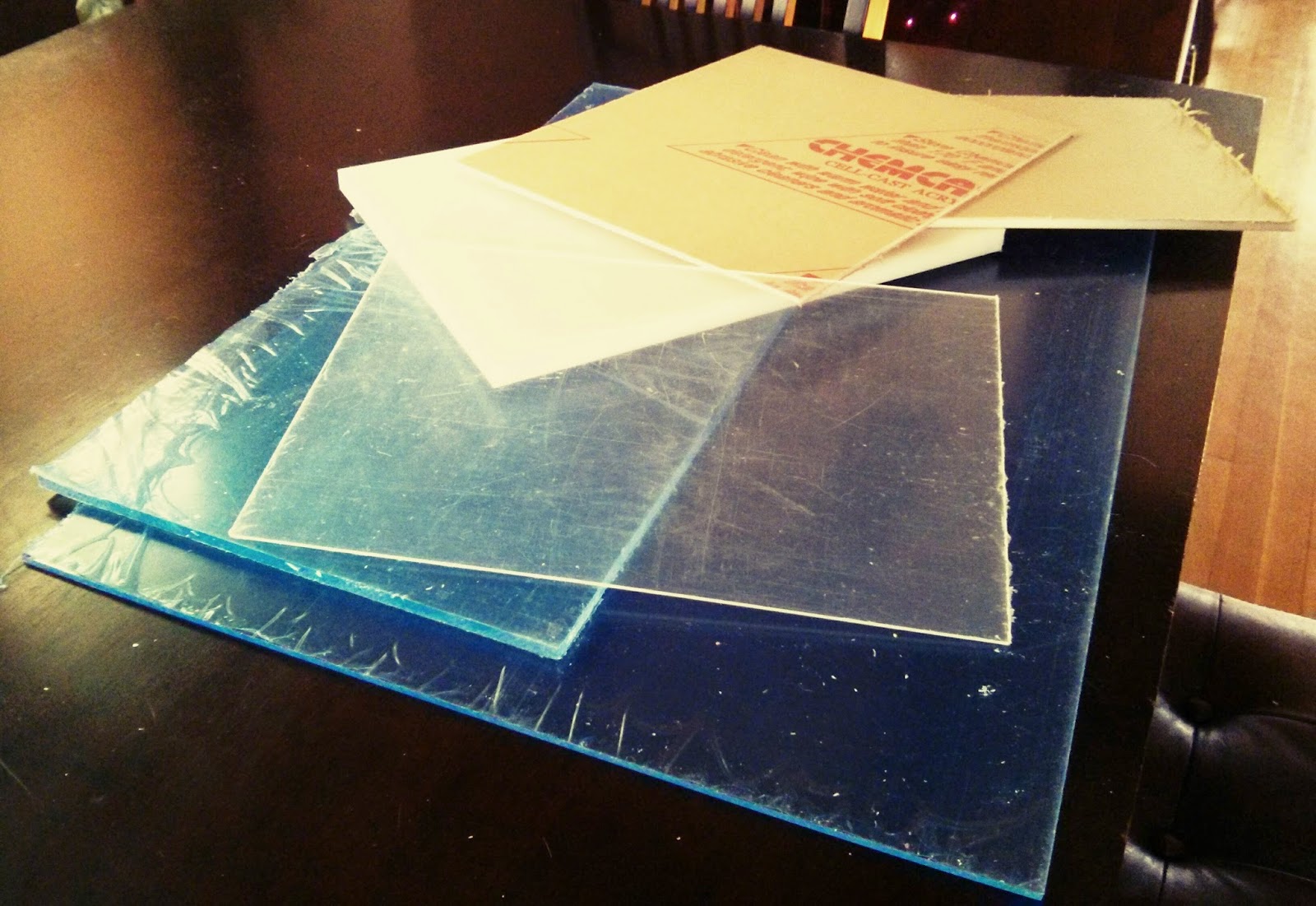 Orrin Doyle and I ended up investigating the cost of building a shell ourselves. We really just needed something to prevent the sound from escaping behind us, and some legs to hold it up. We checked out TAP Plastics who were incredibly helpful in suggesting and providing samples of plastic we could test.

We wanted to test the reflectivity of each plastic sample so we designed an experiment that involves using a sound source (in this case a wireless Bose stereo system), a sheet of plastic to test, and a mic to record the sound reflecting off the plastic. First, we cut the plastic samples using a miter saw so they were all the same size. 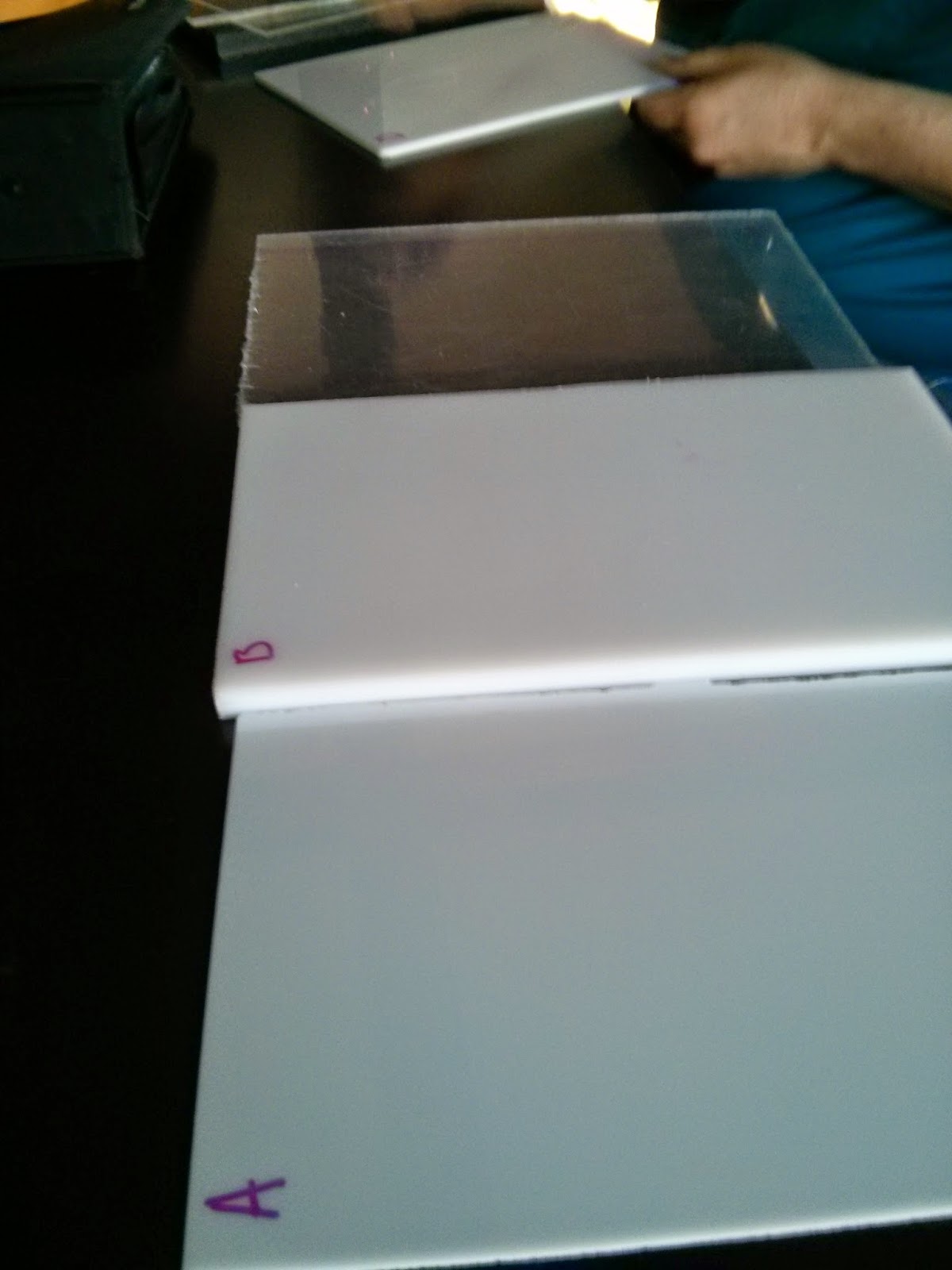 Then we lined the box up with padding to be as sound absorbent as possible. 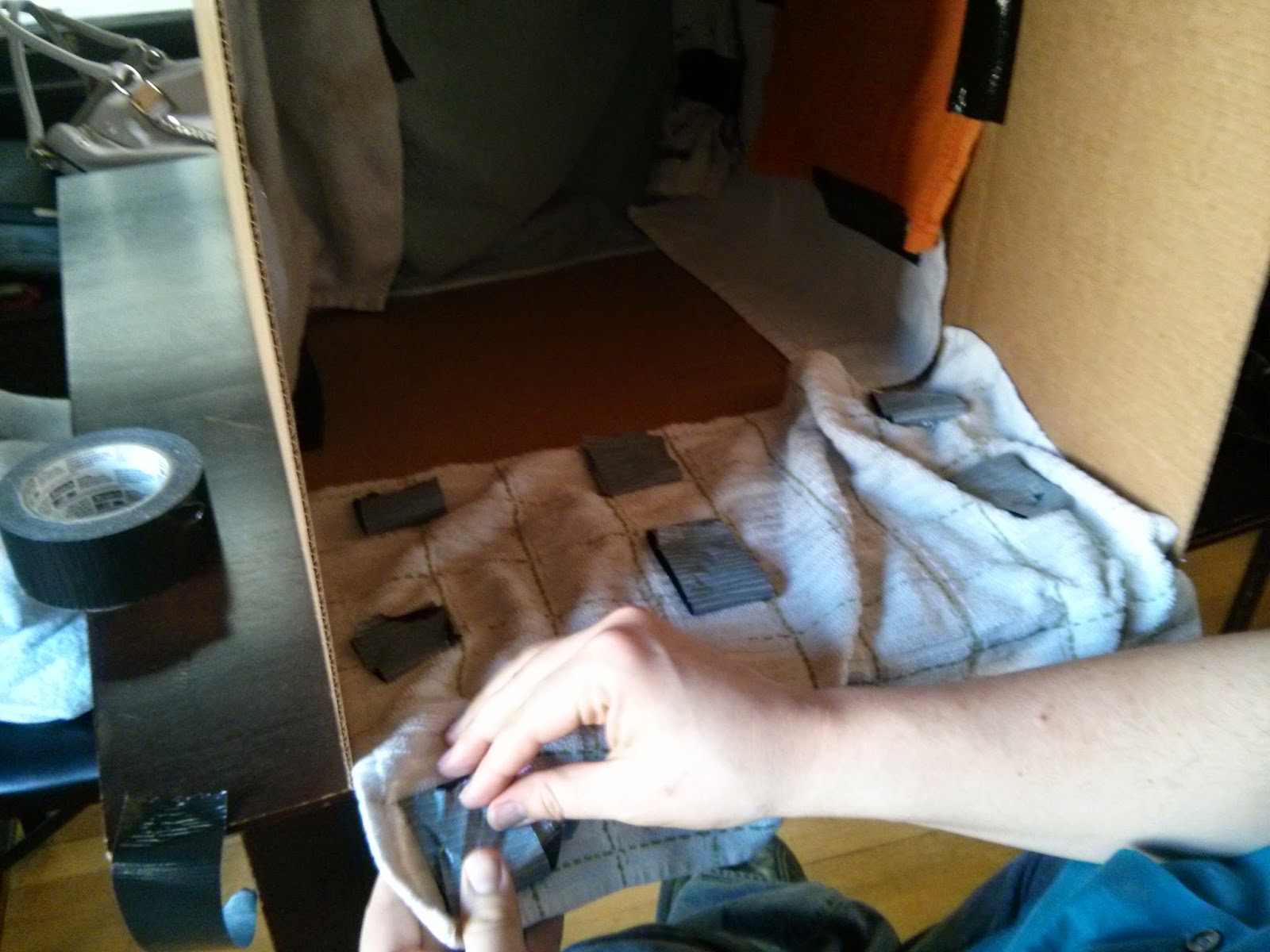 The plastic (white) on the left is on a plastic CD stand. The Bose system, facing the plastic, played a chord and the mic (on the nifty snapple mic stand) recorded the results. 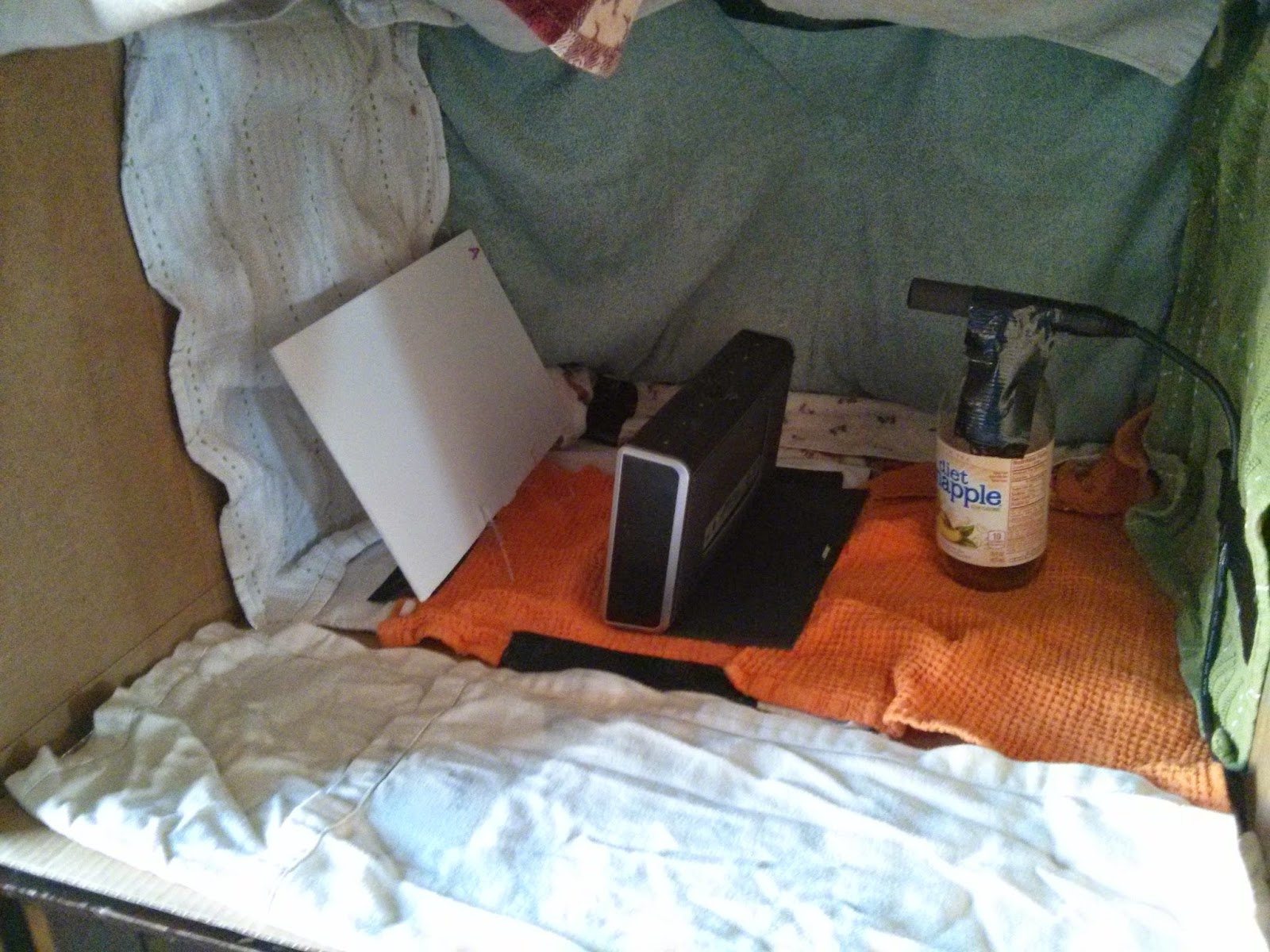 We ran the recorded audio samples through a plugin in audacity that provided us data containing the decibel level (volume) at each frequency.  Here are the test results. We found that 1/4" acrylic gave us the biggest gain in volume. It was an added bonus that it was clear!

[The audio we played through the Bose speaker was a chord built from sine waves, free of overtones. We wanted to isolate frequencies closest to the chord so we moved them to the top of the sheet, in the grey boxes rows 2-15. Columns B - H shows the difference in decibel volume between the control recording and the various recordings using the sample materials. Column R averages all of the grey differences for each material.]

The next step was to design legs that could support the 1/4" 4' x 8' sheet of acrylic, weighing around 50lbs. Each leg is composed of 2 pieces of wood attached by 4 L brackets. 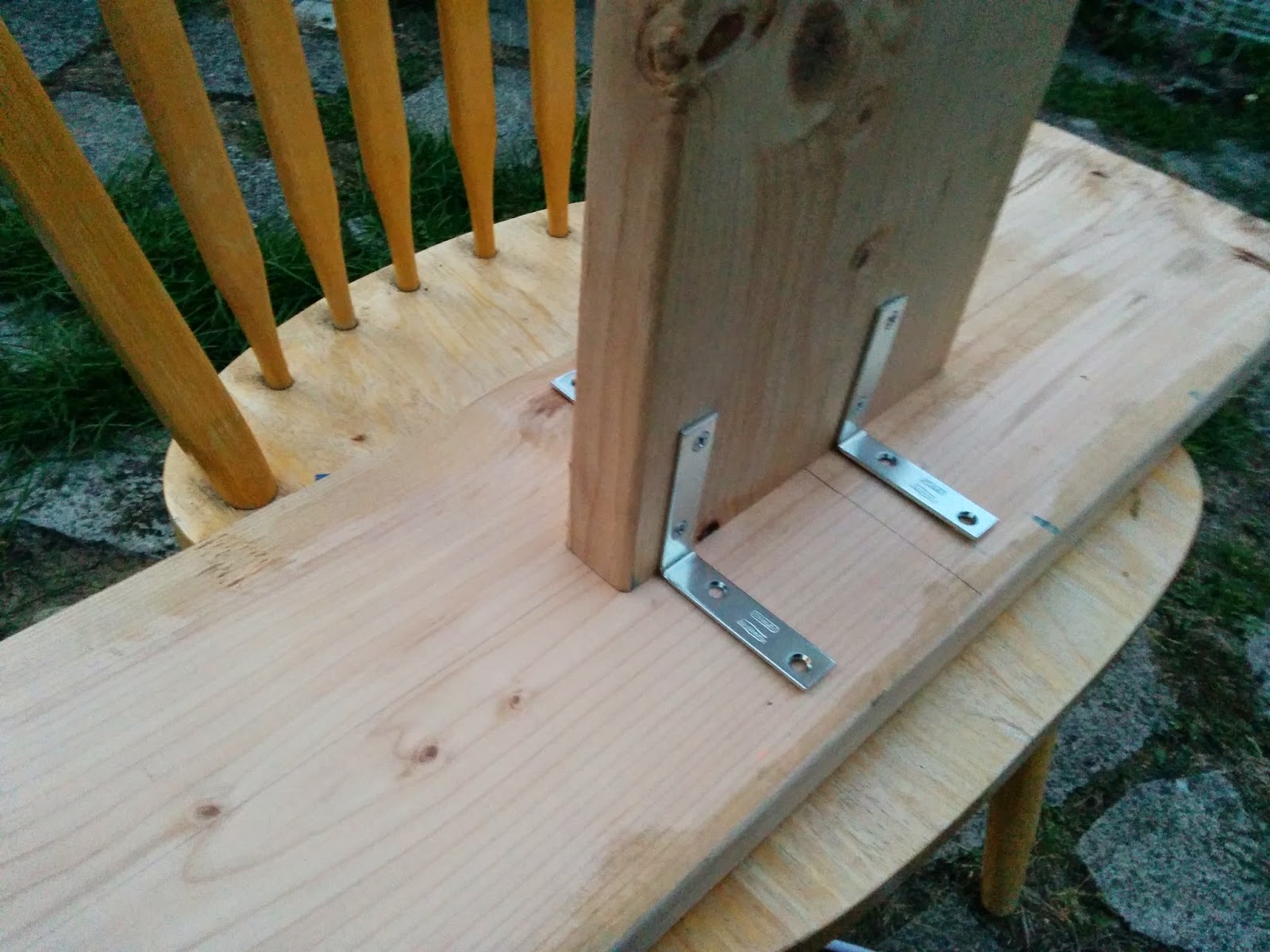 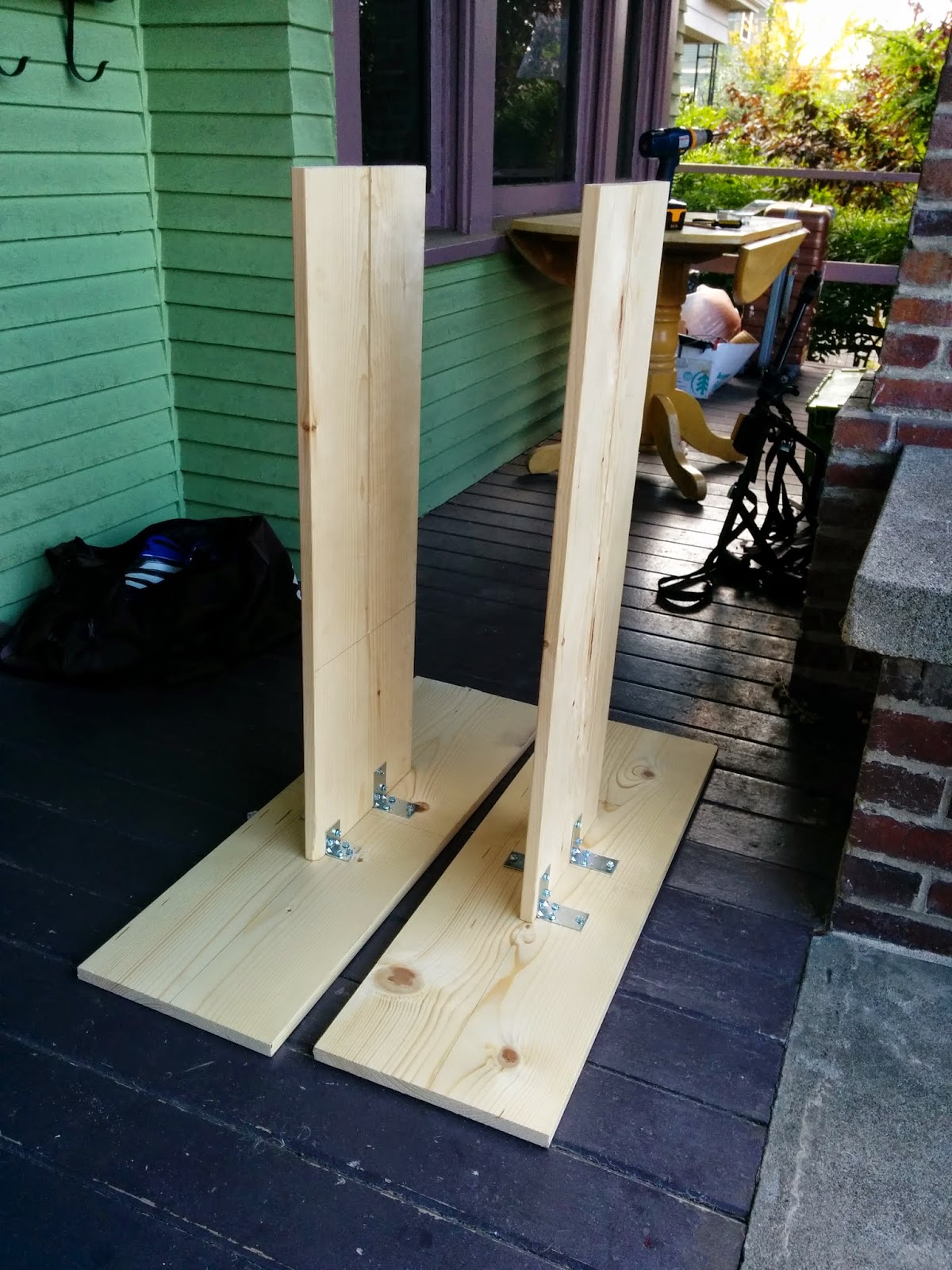 The initial version of the legs ended up a little short. The acrylic bent too much at the top and I was worried that it might snap off, so I made the legs a little taller. I didn't want to drill holes in the acrylic so I cut slots for the acrylic to slide through. This was not an easy task, as neither Lowes, Home Depot or the Lumber store had a table saw, the only tool that could make this cut. [I suppose I could have used a hand saw, but that would have taken too much time.] I luckily met a nice guy in line at the lumber store who offered to make the cut for me on his table saw.

We wanted the shell to be as subtle as possible so we painted the legs black. 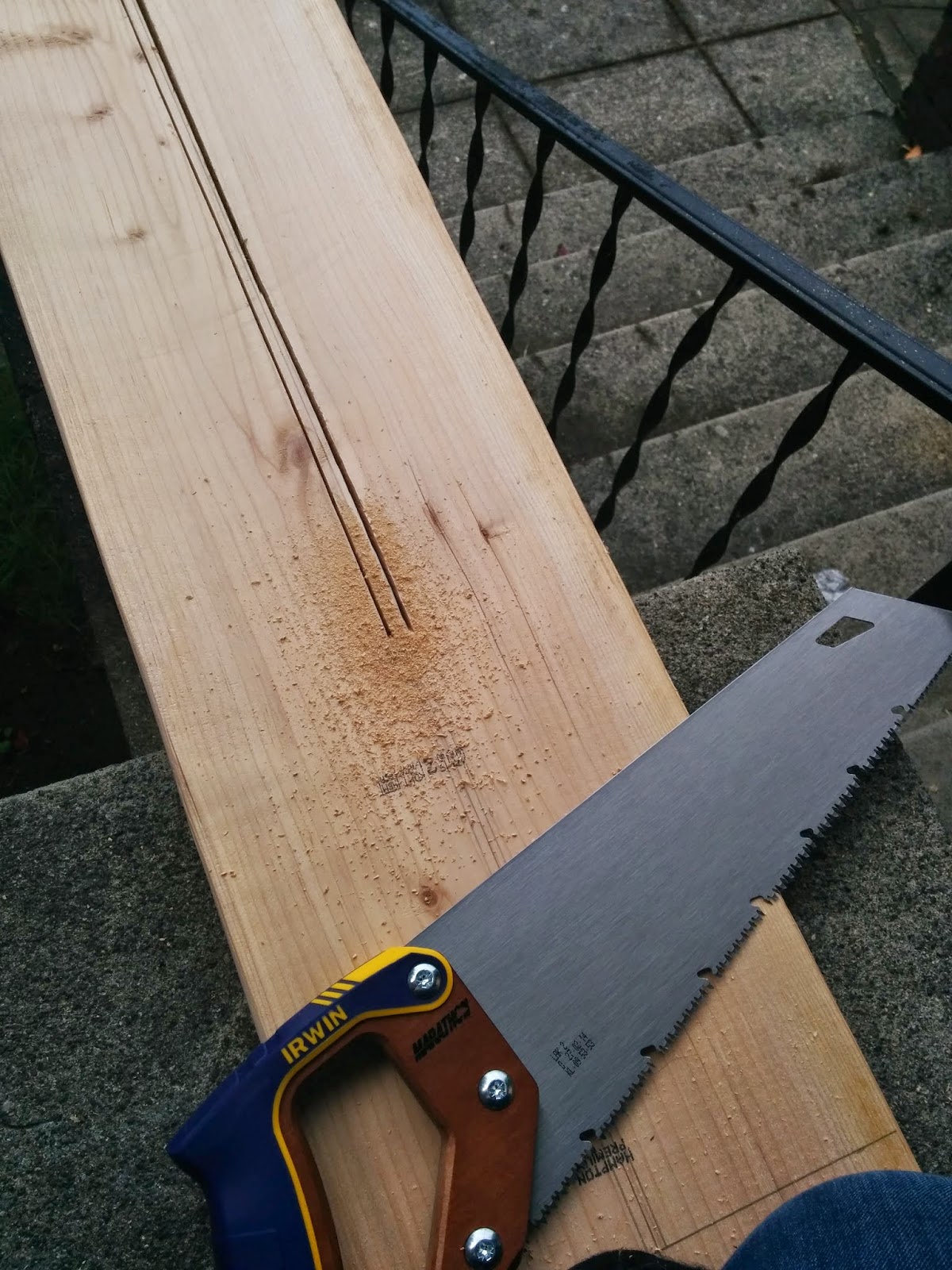 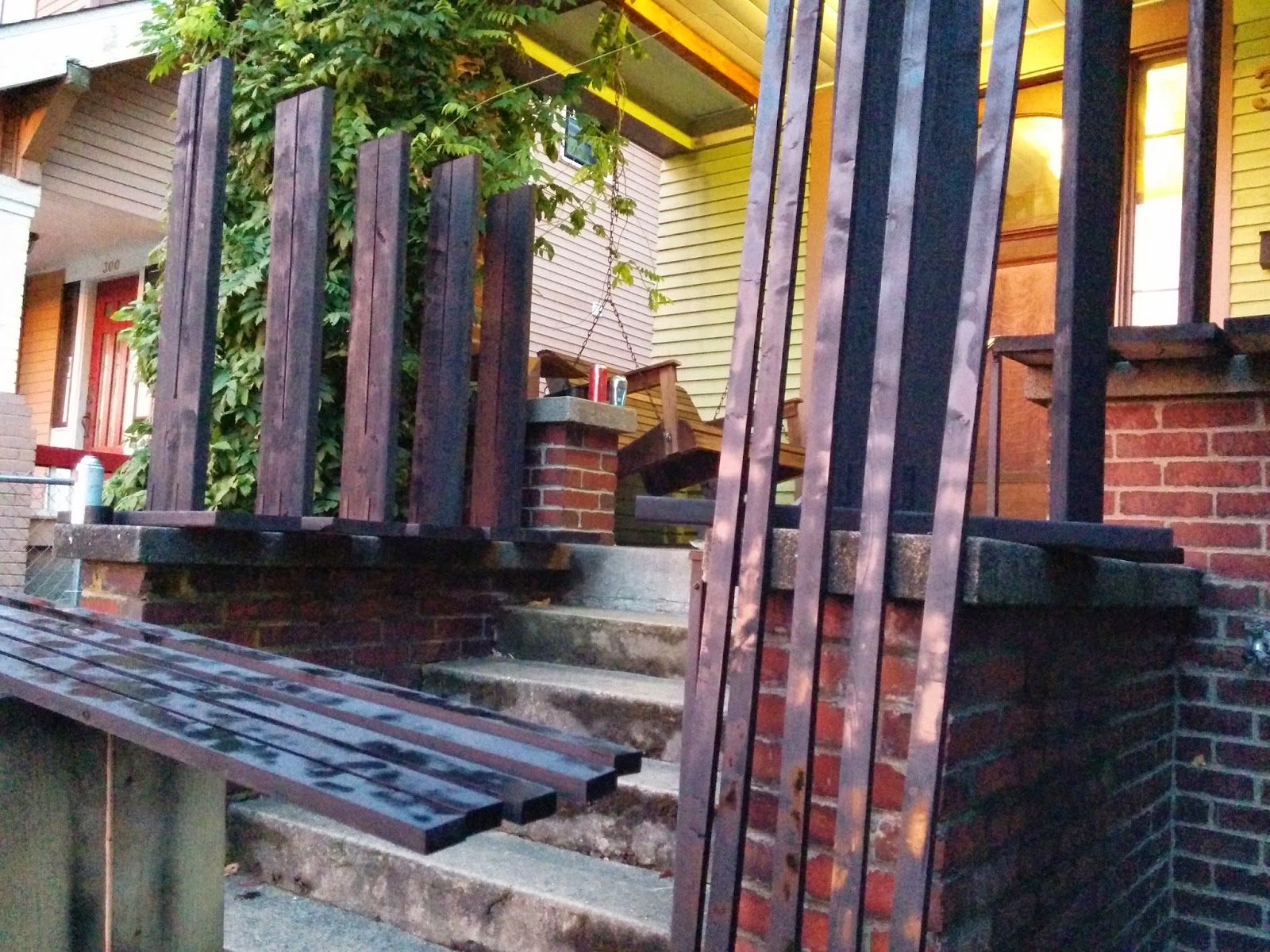 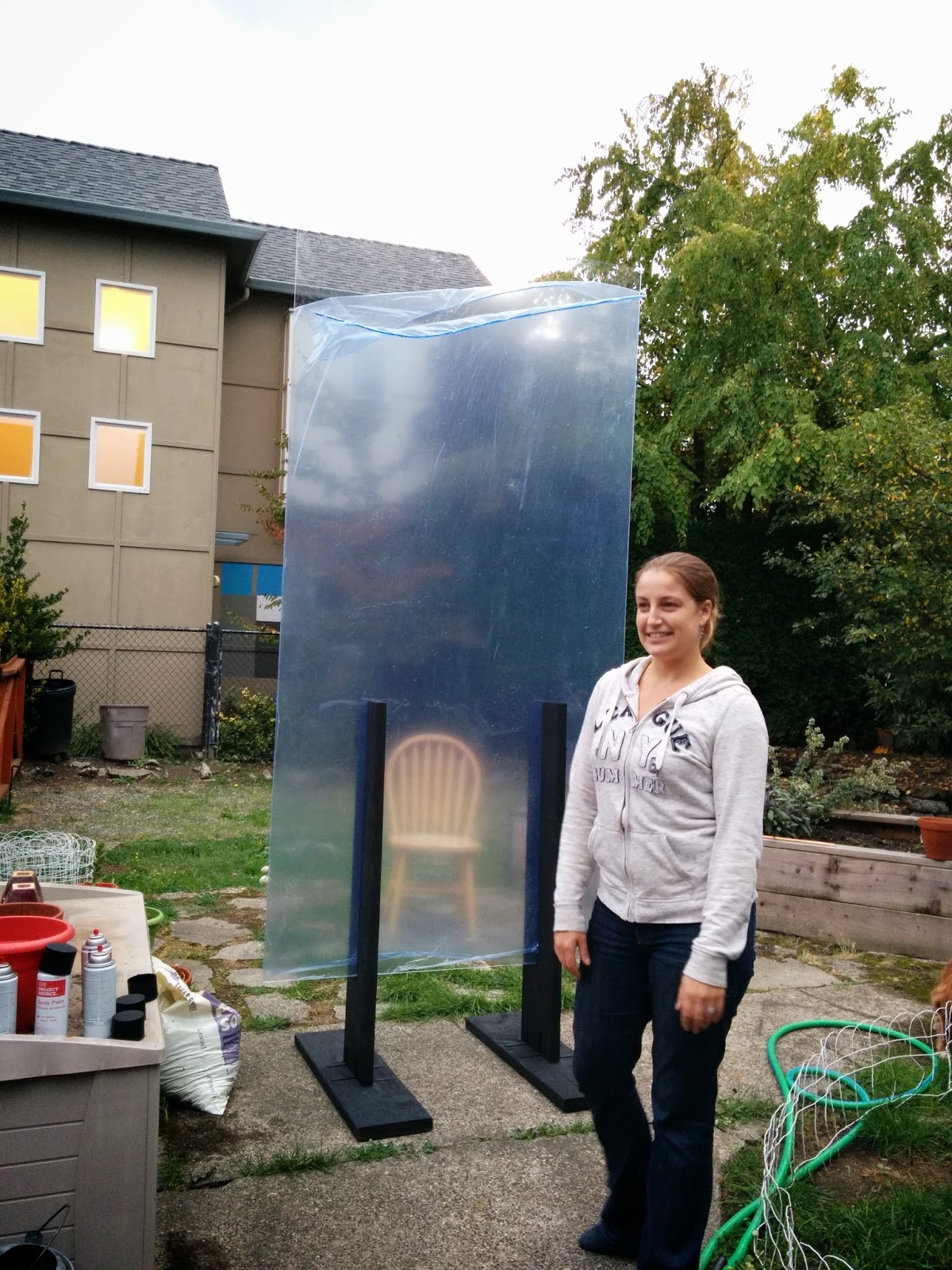 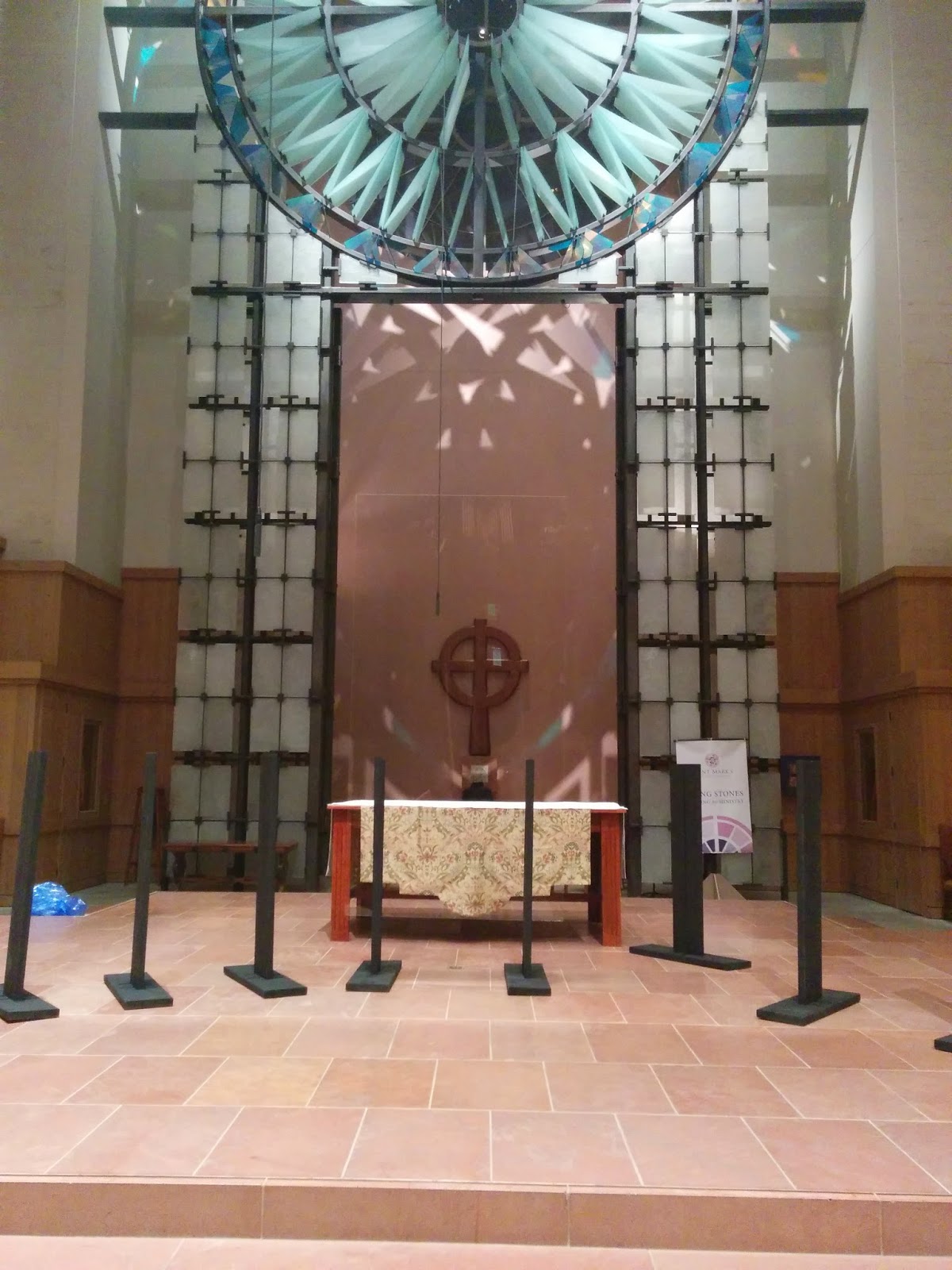 Overall we are really pleased with the shell. It cost about $1,100 in materials for 5 panels. We had our first rehearsal with the shell at St. Mark's and I believe it makes an incredible difference. Come check out the Byrd Ensemble's upcoming concert this Saturday, October 4th at St. Mark's Cathedral. I'd be really interested in what you think! 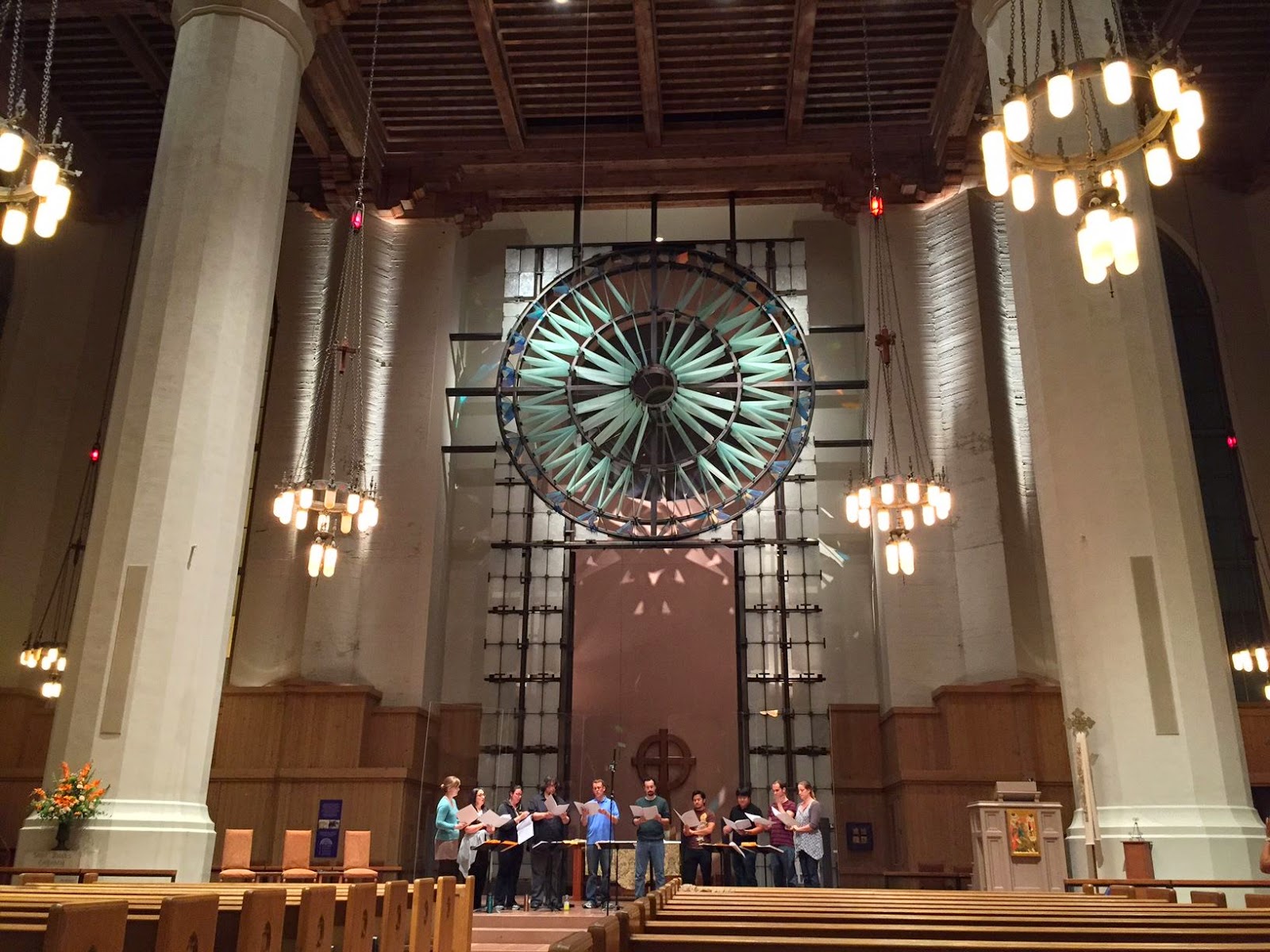