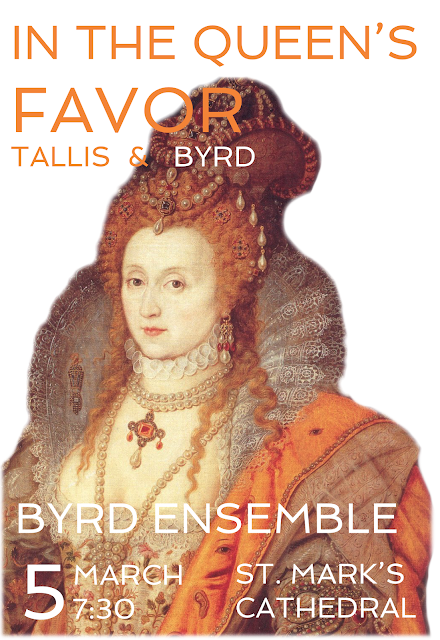 
Thomas Tallis and William Byrd were among Queen Elizabeth I’s most highly favored. In 1575 Queen Elizabeth I granted Tallis and Byrd - the two best English composers at the time - sole rights to the printing of music and the staved manuscript paper to compose music. The monopoly rewarded them with extra income but also generally supported the English music business, as the grant banned the importation of music printed abroad.

Tallis and Byrd took advantage of the monopoly to produce a major printed music collection for liturgical use in 1575 - the sort that had already been appearing on the Continent for much of the 16th century - Cantiones quae abargumento sacrae vocantur, a collection of 34 Latin motets dedicated to the Queen herself. The collection contains 17 motets, each by Tallis and Byrd, one for each year of the Queen’s reign. All but three pieces on our program - Byrd’s O Lord make thy servant, Tristitia et anxietas and Ne irascaris - are from this collection.

Unfortunately, the Cantiones was a financial failure. In 1577 Byrd and Tallis were forced to petition Queen Elizabeth for financial help, pleading that the publication had “fallen oute to oure greate losse” and that Tallis was now “verie aged.” The Queen subsequently granted them a leasehold on various lands in East Anglia and the West Country for a period of 21 years, the length of the patent and essentially an artist’s typical royal subsidy.

In 1589 Byrd published another collection of Latin motets, Cantiones Sacrae I. This collection was dedicated to Edward Somerset, Earl of Worchester and contains music composed by Byrd. Although the music was mostly nonliturgical and intended as chamber music, many of these pieces may have been written for England’s oppressed Roman Catholic community, as evidenced by the references to Jerusalem lying desolate and the pleas to God to remember his people.

Byrd, a pupil of Tallis, obtained the prestigious post of Gentleman of the Chapel Royal in 1572. Though he was not required to write in as many styles as Tallis, since the political and religious situation in England had settled somewhat by Byrd’s tenure, he was an impressive successor to his teacher. Byrd’s musical challenges were more personal. He spent his life composing for a Protestant church as a devout Catholic. The new Protestant service required a compositional style that clearly communicated the meaning of the text to the congregation, which amounted to a primarily chordal texture with English language text. The Catholic tradition still favored Latin texts and the music was more elaborate in style. Byrd’s music was a compromise and sat right in the middle - simpler than contemporary Catholic music and more complex than his Protestant colleague's compositions. Despite this seeming compromise, many believe that his music often reflects his desire for the return of Catholicism in veiled terms, particularly in the works Tristitia et anxietas and Ne irascaris, Domine. It may have been this inner conflict that allowed Byrd to produce some of the most beautiful compositions of Renaissance vocal music ever written.


The program opens with Byrd’s O Lord, make thy servant (not from either Cantiones collection), a prayer for the Queen and most likely composed either as part of an effort to secure an appointment with the Royal chapel in London or during the years following his attainment of the post in 1570. It’s a direct homage to Queen Elizabeth I based on text from Psalm 21 but customized to address Elizabeth directly by name. The piece is representative of the Anglican style - a focus on expressing the meaning of the text as clearly as possible.

Emendemus in melius, a five-voice motet for Ash Wednesday, was Byrd’s first published work. The piece begins with a highly expressive chordal declamation and continues in this fashion for the remainder of the short, three-minute motet.

The program concludes with Byrd’s greatest piece, Tribue Domine. Unlike most of the other pieces in the 1575 Cantiones, the text is from a medieval collection of Meditationes (Meditations on the Life of Christ) attributed to St. Augustine. In this twelve-minute masterpiece, Byrd pulls out his full arsenal as he skillfully exhibits a contrast of polyphonic and homophonic textures as well as polychoral writing.

Tallis is regarded as perhaps the most important composer in the Tudor period. Not only did Tallis compose under four successive monarchs (Henry VIII, Edward VI, Mary I and Elizabeth I), but he was capable of writing brilliantly in whatever musical style England was enforcing at the time. Henry VIII’s “breaking away” from the Roman Catholic church in 1534 because of his desire to divorce the Queen introduced simpler forms of writing which we now find characteristic of the Anglican church. The reformed Anglican liturgy during Edward VI’s reign introduced the English to sacred music in the vernacular. At Mary’s accession in 1553, the Roman Rite was restored and the compositional style reverted back to the more elaborate and florid compositional style prevalent earlier in the century.

Tallis’s Dum transisset sabbatum is a five-part choral respond motet for Easter. A choral respond is a kind of call and response between soloists - singing the first words of the response to the plainsong melody - and the choir, which follows with a polyphonic setting of the remaining words. Dum transisset is unusual in employing the cantus firmus - the chant in long notes - in the highest voice. Tallis normally composes the cantus firmus part in a middle or lower voice.

Suscipe quaeso, Domine is one of Tallis’s several seven-voice works. The text is by the sixth century Spanish Saint Isidore of Seville and is highly penitential in nature. The size of the choral forces along with the length suggest that it may have been composed for a major public occasion, perhaps in 1554 when Cardinal Pole, who had been appointed Archbishop of Canterbury by Queen Mary I, absolved England from schism, bringing England back into the Catholic fold.

Tallis’s O sacrum convivium, a Magnificat antiphon for the feast of Corpus Christi, represents the Catholic style in the early sixteenth century. The piece opens with a clear and conventional imitative counterpoint. Each phrase of text corresponds to a musical phrase beginning imitatively and leading to a cadence. 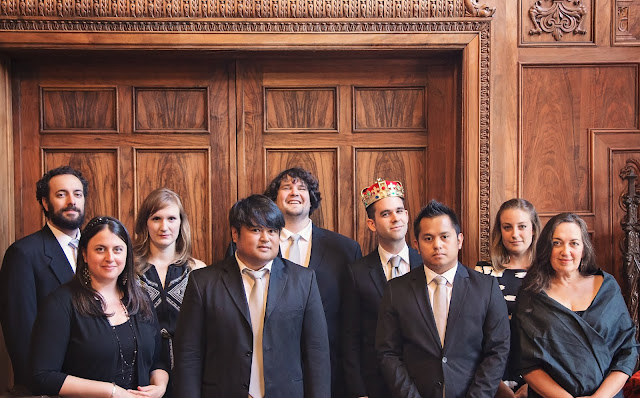 THE BYRD ENSEMBLE is a Seattle-based vocal ensemble specializing in the performance of chamber vocal music. Since 2004 the ensemble has performed medieval, Renaissance, baroque, and modern music on an international stage. Described as “pure and radiant” (Gramophone), “immensely impressive” (Early Music Review), and “rich, full-voiced, and perfectly blended” (Early Music America), the ensemble is garnering international acclaim for its recordings of Renaissance vocal music. The Byrd Ensemble is an Artist-in-Residence at St. Mark's Cathedral, Seattle, WA, where the group presents its concert series. The Byrd Ensemble is a 501(c)(3) nonprofit organization. The group’s creative efforts are led by Markdavin Obenza.

ARTISTIC DIRECTOR MARKDAVIN OBENZA has dedicated his career to music. In addition to the Byrd Ensemble, Markdavin is also the director and founder of the Seattle-based chamber choir Vox16 and is the producer for Scribe Records, an independent record label. He is an active singer and has performed with the Tudor Choir and members of the Tallis Scholars. He is currently the Director of Choral Music at Trinity Parish Church (Seattle, WA).