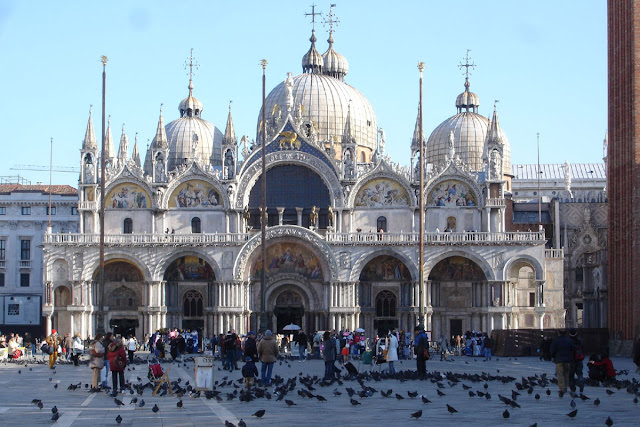 St. Mark’s Basilica employed some of the most innovative Renaissance composers who led the stylistic charge into the Baroque period. This program features polychoral music by Monteverdi, Croce, Gabrieli and Willaert.

Renaissance vocal music hit its stride in the 16th and 17th century as composers mastered the art of expression. The previous writing style of the 15th and 16th centuries of long endless phrases evolved into an expressive style that focused on communicating the text. In Italy, the development of this new expressive style can be traced to one church, St. Mark’s Basilica in Venice. St. Mark’s—one of the most famous churches in the world—was a home to some of the most innovative Renaissance composers who were largely responsible for the musical shift into the Baroque period.

St. Mark’s—a fine example of Byzantine architecture—was built in 828 and has withstood many structural and decorative changes through the centuries. During the 14th century, it was common for people returning from the Orient to bring columns, capitals, statues or friezes to add to the basilica— effectively covering it in plunder. The exterior brickwork became covered with various marbles and carvings—some much older than the building itself—and the interior filled with gilded Byzantine mosaics. From the 11th century on, the building has been known as the Church of Gold.

Claudio Monteverdi—the most well known composer at St. Mark’s—grew up in Cremona, Northern Italy, singing in the cathedral choir. Monteverdi moved to Venice in 1613 to work at St. Mark’s and allegedly restored the falling musical standard. Monteverdi's predecessor's poor financial management skills was to blame for the subpar musical reputation at St. Mark’s. During Monteverdi's time at St. Mark's, he laid the stylistic foundation for the early Baroque style. The development of Basso Continuo was key in the transition to the baroque period. The Basso continuo is the doubling of the bass vocal part by an instrument and functioned to strengthen the harmonic structure over which a group of instrumentalists or "continuo" would improvise. St. Mark’s is very large and musicians were often split up into groups and placed at different parts of the church to perform call and response type music. Having instruments double singers improved clarity in such a large space. The Basso Continuo was logistically necessary. The practice of "doubling" was not new. 16th century sources comment on the deteriorating quality of church choirs who used the organ to double the substandard choirs.

Hence, it was legitimate to have the organ double the choir in Monteverdi's In illo tempore, though we will perform it unaccompanied. Monteverdi composed the mass to present to Pope Paul V in 1610 in hopes to receive a scholarship for his son and for some self notoriety. Because church music at the Sistine Chapel was always sung unaccompanied, the edition for the Sistine Chapel did not include an organ part. For no obvious reason, Monteverdi's In illo tempore is modeled on Franco-Flemish composer Nicholas Gombert's motet by the same name. It's possible Monteverdi wanted to look beyond the preceding generation of Italian composers to Flemish sources. Monteverdi extracts 10 themes from Gombert's motet to construct a 6 voice mass 30 minutes in length. Monteverdi's Adoramus te, Christe was published in Giulio Bianchi's—a colleague of his— book of motets in 1620. Memento was sung at Vespers on important feast days during the year. For these occasions, the high altar retable was opened and the choir sang double-choir psalms. Monteverdi composed Memento in a similar double-choir psalm chant style.

St. Mark’s acoustic presented another challenge—the distance between opposing choir lofts causes a sound delay. Composers used this acoustic peculiarity to their advantage. Instead of trying to coordinate widely separated choirs to sing the same music simultaneously in such an expansive space, composers such as Adrian Willaert—choirmaster of St. Mark’s in the 1540s—solved the problem by writing polychoral (multi choir) music. Opposing choirs would sing successive, often contrasting phrases of the music. The stereo effect grew in popularity and soon other composers were writing music for the same effect—not only in St. Mark’s— but in other large cathedrals in Italy. St. Mark's architecture caused the development of the Venetian Polychoral Style which spread throughout Europe.


The peak of the development of the Venetian Polychoral style was in the late 1500s while Giovanni Gabrieli was organist at St. Mark’s. Giovanni Gabrieli—nephew of Andrea Gabrieli—used large choirs of brass and began to specify dynamics for the echo effects. The spectacular sonorous music in St. Mark’s during Gabrieli’s years was soon exported across Europe by visiting composers and musicians.

Giovanni Croce’s affiliation with St. Mark’s was minimal at best—records show he might have been a member of the boys choir at St. Mark’s around 1585. Croce is most famous for his madrigals, but he did write a few polychoral pieces in the style of Giovanni Gabrieli such as Laudans exultet gaudio. Polychoral music is fun to sing, it feels like you are in competition with the other choir—seeing who can be the loudest.

Adrian Willaert—Flemish composer of the Renaissance and founder of the Venetian School—was one of the most representative members of the northern generation of composers who moved to Italy bringing the polyphonic Franco-Flemish style with him. In contrast to the bombastic polychoral music, Willaert’s setting of Ave Maria is simple. Scored for only 4 voices the motet captures a beautiful somber mood.
Posted by Markdavin Obenza at 1:15 PM