Christmas in the Sistine Chapel 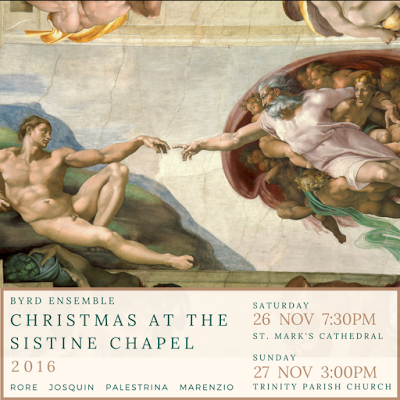 
FOR MORE THAN A MILLENNIUM, the papal choir has been the most important musical body of Christendom. The choir existed as the Roman "schola cantorum" in the 6th century, and in the 15th century the papal choir was re-established in Rome under Sixtus IV, who rebuilt the Sistine Chapel and established the daily sung services which became the official worship of the papal court.
Because music was always unaccompanied in the Sistine Chapel, it was crucial that the Papal Choir perform at the highest level. Membership in the papal choir came with great rewards, financially and with special privileges. New choir members competed in front of the existing members, who acted as a judge panel, for these coveted positions. The choir was consistently able to attract the finest singers and composers from all over Europe, resulting in a diverse choir made up of three national groups: Franco-Flemish, Italians and the Spanish. After the Counter-Reformation, the personnel was almost entirely exclusively Italian.
The program explores what Christmas Mass might have sounded like at the Sistine Chapel. The main mass parts feature Renaissance motets by Franco-Flemish and Italian composers, and the interpolated chant, from the Roman Rite, is sung by Vox16.
Referred to as “the divine composer,” Italian composer Luca Marenzio (1553-1599) brought the Italian madrigal to its highest point of artistic and technical development. He produced seventeen books of madrigals between 1580 and 1589, their contents demonstrating a mastery of the madrigal style. Through imitation, cascading lines, and attention to the text,  Marenzio incorporates madrigal techniques in the 4-part Hodie Christus natus est, a joyful motet about the birth of Christ.
During the 16th century, Josquin des Prez (c.1450-1521), the central figure of the Franco-Flemish School, acquired the reputation as the greatest composer of the age. He joined the papal choir from 1489 to 1495 and may have carved his name into the wall of the Sistine Chapel, as a “JOSQUINJ” was recently found on a wall by workers restoring the chapel. Since it was traditional for singers to carve their names into the wall, it is likely that Josquin did also, and if so, this would be his only surviving autograph.
Praeter rerum seriem is one of Josquin’s greatest pieces. The Christmas motet scored for six voices is based on a chant melody in long notes. For much of the piece, the polyphony is presented antiphonally between the three upper and the three lower voices. The opening begins with the three lowest voices in minor-mode polyphony, creating a dark and unique sound world. Rore uses this opening in all five of his mass movements.
Cipriano de Rore (1516-1565) represents a generation of Franco-Flemish composers after Josquin who went to live and work in Italy. Rore found employment with the Duke Ercole II d'Este at the court of Ferrara for whom he composed the Missa Praeter rerum serium. In 1563, Rore was chosen to succeed Adrian Willaert at St. Mark’s, Venice, the most prestigious post for a musician in Italy, but did not stay long and returned to Parma by September 1564, where he died the following year.
Rore, like Marenzio, wrote a large number of madrigals but also composed sacred music of the highest caliber in the Franco-Flemish tradition, following in Josquin’s footsteps. The Missa Praeter rerum seriem scored for seven parts is based on Josquin’s Christmas motet Praeter rerum seriem and is one of the most elaborate parody masses of its time. (A parody mass is a musical setting of the mass that uses material from another pre-existing piece of music.) Through this work, Rore pays his respects to both his employer Duke Ercole II d'Este and to Josquin. Rore uses the same cantus firmus (a pre-existing melody used as the basis of a polyphonic composition) found in Josquin’s motet, but set it to text in praise of the Duke, “Hercules secundus, dux Ferrariae quartus vivit et vivet” (Hercules the Second, fourth Duke of Ferrara, lives and will live). One might argue that very little of Rore’s Missa Praeter rerum seriem is original. He added an extra soprano part for a brighter sound and turned one of the existing parts into a long-note cantus firmus for the dedication to the Duke, “Hercules secundus...”
Gaude virgo mater Christi is from a time when devotion to the Virgin Mary flourished in the High Middle Ages and the Renaissance, fostering new celebrations, new poetry, and music dedicated to the worship of the Virgin. The text has no liturgical use and was likely written for private devotion. The four-part motet tells the story of Mary’s involvement with the Christ Child from her Annunciation, through his death and resurrection. Josquin’s famous Benedicta es was sung during the mass for feasts of the Virgin Mary. The motet for six voices is based on a paraphrase of a plainchant sequence Benedicta es.
Italian composer Giovanni Pierluigi da Palestrina (1525-1594) was the most prolific composers of his time, composing over 300 motets, 140 madrigals, 104 masses, 72 hymns, 68 offertories, and 35 Magnificats. He was hired by the Sistine Chapel in 1555, but left shortly after the new pope, Paul IV, decided to reinstate the rule of celibacy for anyone working there—Palestrina and two other married singers were forced to leave. During this period, the Council of Trent implemented musical policies to remove the “impure” or secular elements from the liturgy with an emphasis on intelligibility. The Palestrina style embodied the new aesthetic and is characterized by a balance between intelligible text and rich consonant harmony. Palestrina’s Hodie Christus natus est, based on the text of the Magnificat Antiphon at Second Vespers on Christmas Day, contains declamatory cries of joy, “Noe, noe.”