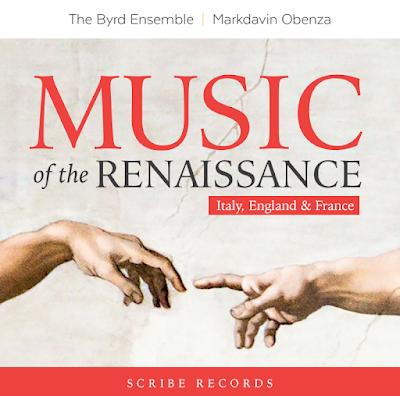 
The music on this disc spans the late-15th century to the early-17th century and represents the Italian, English, and Franco-Flemish schools of polyphony. From the singular phenomenon that is the Allegri Miserere to the gleaming architecture of Palestrina’s double-choir canticles, the works of the Italian school bookend a brief, chronological survey of the 16th-century English psalm motet as well as two sets of Lamentations, one English, the other Franco-Flemish. In the span of 70 minutes, we are vividly reminded of the remarkable diversity of the late-Renaissance polyphonic repertory.

Gregorio Allegri was an Italian composer and singer who joined the Papal choir in 1629. His setting of Psalm 51, Miserere mei, Deus, is easily the most famous vocal work of the Renaissance, largely due to a somewhat spurious edition dating from the early-20th century, which included a soaring high C for the soprano in the odd-numbered verses sung by a quartet. The history and evolution of Allegri’s setting is now well-known and well-documented.[i] It was composed during the reign of Pope Urban VIII, probably during the 1630s, for use in the Sistine Chapel during Matins, as part of the Tenebrae services on Wednesday and Friday of Holy Week. The service usually would start around 3:00 AM, and during the ritual, candles would be extinguished, one by one, until only one remained alight and hidden.


Originally, the work was simply a succession of chords to which the psalm was chanted (the tone has been identified as tonus peregrinus), but over decades of exclusive performance by the Papal choir, embellishments were added by singers and the piece evolved into a legendary work. A heightened sense of mystery surrounded the piece as the Papal choir jealously guarded it from others. Occasionally, a copy of the music would make its way out into the world, once via a young Mozart, who copied the work from memory after hearing a performance. For this recording, the now-traditional setting serves as the basis for further embellishments developed by Joshua Haberman in the spirit of the abbellimenti tradition.

The English school is represented by a selection of three psalm motets, a genre that developed out of the late-medieval votive antiphon in the 1540s, at a time when, in the climate of reform, prayers addressed to the Blessed Virgin Mary and other saints fell out of favor. Composers of psalm motets sometimes adopted the structure of the old votive antiphons, beginning in triple time and changing to duple at the midway point. Passages for a reduced number of voices in any variety of combinations alternated with sections for full choir. Other examples of psalm motets were built solely on structural imitation, a technique developed on the continent during the late Renaissance, but which the English were slow to adopt. Psalm motets also continued the use of the five voice-types employed in large-scale votive antiphons: treble (soprano), mean (alto), tenor, baritone, and bass, although a number of examples (including those on this disc) omit the treble.

John Taverner was the most important English composer of the first half the 16th century. He was the first director of music at the newly established Cardinall College from 1525 to 1530. Taverner’s music bridges the gap between the complex, florid style of the Eton Choirbook composers of the late-15th century and the simpler, imitative style of the later mid-16th century composers, including Thomas Tallis and John Sheppard. His work is characterized above all by a sweeping melodic lyricism.

Quemadmodum probably dates from Taverner’s later years. The motet survives in a wordless source, likely used for recreational purposes by musical Elizabethans, but editor Haberman joins his predecessors in taking the lead from the title and fitting the first two verses of Psalm 42 to Taverner’s notes. Quemadmodum, although an early example of the psalm motet, nevertheless more closely resembles a Flemish motet than an English antiphon. The piece is in duple meter throughout, for full choir throughout, and employs structural imitation. The six-voice scoring also follows the Flemish preference for lower voices, creating a dense, compact texture that Tallis would later adopt in his seven-voice works, such as Loquebantur variis linguis, Suscipe quaeso, Domine, and the canon Miserere nostri. Upward transposition of the edition recorded here matches the voices more closely with the traditional English ranges of this period. Yet, despite all that seems un-English about the motet, the giveaway is Taverner’s supreme melodic gift. So beautifully developed in his large-scale Masses and antiphons, his sense of line also lends itself to the shorter melodic statements of imitation, thoroughly worked among the six voices.

Robert White was a leading musical figure in mid-16th century England during this period of continuing turmoil. He was a chorister at Trinity College, Cambridge, and later succeeded his father-in-law Christopher Tye as Master of the Choristers at nearby Ely Cathedral. He next worked at Westminster Abbey, but died of the plague in 1574. White wrote very little music in English, choosing to set Latin texts in an individual style that was at once old-fashioned and modern for its time—the sprawling musical structures of an earlier era were informed with the modern technique of imitative polyphony, with voice after voice repeating similar melodies in patterns that generate genuine urgency and drive.

White’s Exaudiat te Domine is composed using the old antiphon format, alternating full and reduced sections. He employs mean, tenor, baritone, and bass voices, omitting the trebles. Here, the edition is transposed up a minor third, resulting in ranges for soprano, alto, tenor, and baritone. The baritone voice is split into a gimell from the beginning. (The gimell is an English device wherein a voice part is divided into two separate lines.) The piece begins with an extended trio for SABar. Imitation dissolves into extended melisma, leading into the first full section for SATBar1Bar2. Changing to duple meter, the motet continues with a double-gimell quartet for sopranos and baritones, followed by a second double gimell for altos and tenors, a passage featuring the false relation—the clash created by the raised leading tone in one voice sounding against the minor seventh in another. The expertly crafted final full section begins with the gradual addition of the other voices—the second baritone, followed by the soprano and first baritone. The resulting seven-voice texture provides White the means for an extended, thoroughly worked point of imitation at “Amen,” filled with cascading parallel thirds and sixths.

Thomas Tallis was unique in working under no fewer than four monarchs during his long life spanning most of the 16th century. He was able to adapt his musical style to meet virtually any requirements. He joined the Chapel Royal in 1543. Tallis’s two settings of the Lamentations of Jeremiah are among the most beloved works of Tudor polyphony. They are settings of readings for the Maundy Thursday liturgy, but because the music survives only in manuscript we can’t be certain if Tallis intended them for liturgical performance or private, devotional use. The musical style suggests they were composed during Elizabeth I’s reign. Tallis’s compositional triumph here is his ability to imbue an overall feeling of restraint with a powerful emotional undercurrent.

“Tallis is dead and music dies.” So lamented William Byrd, who was once Tallis’s pupil and later his colleague. Byrd was one of the greatest of all English composers. He remained a Catholic in Protestant England, serving in the court of Elizabeth I for many years before moving out of London to a Catholic community toward the end of his life.

Like Taverner and White before him, Byrd’s voicing for the psalm motet Domine, quis habitabit omits the treble. The nine-voice texture (again, transposed up a minor third for this recording) includes pairs of sopranos, altos, and tenors over triple basses. Byrd eschews the antiphon structure, opting for full scoring throughout, save for a central section omitting two of the bass voices. The thorough working of White’s imitation at the end of Exaudiat te is brought to new heights by Byrd. Following a tutti rest, the final section begins with strong homophony. The texture quickly becomes polyphonic as Byrd introduces his final tour de force: canonic imitative points in each pair of the three upper voice parts as three basses pass motives back and forth, sometimes in literal imitation, sometimes inverse, sometimes abandoning the point altogether for a free polyphonic phrase. With the final text, “in aeternum” (substituting for an “Amen”), Byrd brings us to a rousing and seemingly inevitable final cadence.

French composer Antoine Brumel was a pupil of Josquin Desprez. Among his numerous posts, he was a singer at Chartres Cathedral and Master of the Boys at Notre Dame Cathedral, Paris. Brumel’s only surviving set of Lamentations is one of the most beautiful in the repertory. Composing for four voices in a chordal style, Brumel strikes a somber and contemplative mood. Following tradition (as did Tallis), he provides musical settings for the names of the Hebrew letters (here, Heth and Caph) that divide the text.

The outstanding composer of the Counter-Reformation years was Giovanni Pierluigi da Palestrina. He was probably a choirboy at the church of Santa Maria Maggiore in Rome and later served there as maestro di cappella for ten years from 1561. The influence of his conservative and harmonically pure style was strongly felt throughout the latter years of the Renaissance and well into the Baroque era. Much of his music was performed by the Papal choir in Rome. Listening to Palestrina’s double-choir settings of the Magnificat and Nunc dimittis back to back on this disc, one must remember they were not composed as a pair for Anglican Evensong, but rather for use separately in the Catholic offices of Vespers (Magnificat) and Compline (Nunc dimittis). Each stands on its own as a powerful expression Palestrina’s lasting achievements.

Doug Fullington is founder and director of the Tudor Choir, based in Seattle, Washington. As a countertenor, he has performed with the Tallis Scholars as well as the Tudor Choir, Byrd Ensemble, and Cappella Romana. Trained as a musicologist, Doug is also a dance historian, with a focus on 19th-century French and Russian ballet.

[i] See, for example, http://ancientgroove.co.uk/essays/allegri.html.