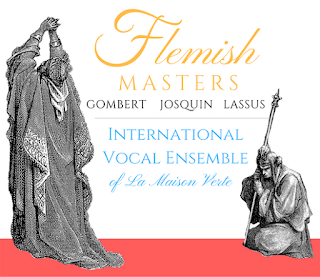 O praise the Lord, all ye heathen: praise him, all ye nations.
For his merciful kindness is ever more and more towards us: and the truth of the Lord endureth for ever. Praise the Lord.

Knowing no man, the Virgin mother bore, without pain, the Saviour of the world.
Him, the king of angels, only the Virgin suckled, breasts filled by heaven.

Glory to God in the highest,
and, peace to his people on earth.
Lord God, heavenly King,
almighty God and Father,
we worship you, we give you thanks,
we praise you for your glory.

Lord Jesus Christ, only Son of the Father,
Lord God, Lamb of God,
you take away the sin of the world:
have mercy on us;
you are seated at the right hand of the Father:
receive our prayer.

I believe in one God,
the Father almighty,
Maker of heaven and earth,
and of all things visible and invisible.
And in one Lord,
Jesus Christ,
Only begotten Son of God,
Begotten of his Father before all worlds.
God of God, light of light,
Very God of very God.
Begotten, not made,
being of one substance with the Father:
by whom all things were made.
Who for us men
and for our salvation
came down from heaven.

And was incarnate by the Holy Ghost
of the Virgin Mary:
And was made man.

And was crucified also for us under Pontius Pilate:
suffered, and was buried.

And the third day He rose again
according to the scriptures.
And ascended into heaven,
and sitteth at the right hand of the Father
And He shall come again
with glory to judge the living and the dead:
His kingdom shall have no end.

And in one holy catholic and apostolic church.
I acknowledge one baptism
for the remission of sins.
And I look for the resurrection of the dead
And the life of the world to come.
Amen.

Holy, holy, holy
Lord God of Hosts.
Heaven and earth are full of your glory.
Hosanna in the highest.

Blessed is he who comes
in the name of the Lord.
Hosanna in the highest.

Absalon my son,
if only I had died instead of you, Absalon!
I shall live no more,
but go down to hell, weeping.

Then the King covered his head
and cried with a great voice:
O my son Absalon, O my son!

By the streams of Babylon,
there we sat and wept
when we remembered you, Zion.
There they questioned us,
those who had led us into captivity,
about the words of our songs.
How shall we sing
the Lord’s song in a foreign land?
On the willows in its midst
we hung up our harps.

How shall we sing the Lord’s song in a foreign land? If I should forget you, Jerusalem, let my right hand fall idle. Let my tongue stick in my throat, if I do not remember you; if I do not keep Jerusalem as the greatest of my joys. Remember, Lord, what the sons of Edom did on that day in Jerusalem.

I am the flower of the field, and the lily of the valleys.
As the lily among thorns, so is my love among the daughters.
As the apple tree among the trees of the woods, so is my beloved among the sons.
I sat down under his shadow, whom I desired: and his fruit was sweet to my palate.
He brought me into the cellar of wine, he set in order charity in me.
Stay me up with flowers, compass me about with apples: because I languish with love.
The fountain of gardens: the well of living waters, which run with a strong stream from Libanus.