Putting some English on it 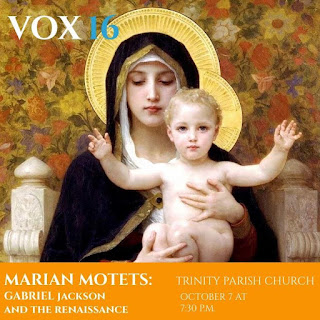 This program fuses the old with the new, featuring Marian motets by English Renaissance masters Thomas Tallis and William Cornysh placed next to contemporary composers John Tavener and Gabriel Jackson.

Typically an all-English program would suggest an in-depth exploration of a very specific style—not this time. The composers may all have come from England, but their music draws inspiration from outside of Western music. Renaissance greats Tallis and Cornysh are exceptions to this, and their inclusion showcases the epitome of the English choral tradition, a kind of benchmark against which to measure their contemporaries.

Thomas Tallis (1505-1585) is regarded as perhaps the most important composer in the Tudor period. Not only did Tallis compose under four successive monarchs (Henry VIII, Edward VI, Mary I, and Elizabeth I), but he was capable of writing brilliantly in whatever musical style England was enforcing at the time. Videte miraculum is a responsory (alternating full choir and solo group sections) sung at Candlemas (The Feast of the Purification) and depicting the birth of Jesus.  The six-part motet is based on chant, sung by the tenor part in long notes. The choir chants a responsory Psalm verse after the motet, repeats part of the motet, sings the "Gloria Patri," and then closes the piece by singing the end of the motet again.

William Cornysh (1465-1523), a true Renaissance man, was a composer, dramatist, actor, and poet. He is known for his contributions to the Eton Choirbook, a collection of English motets compiled between 1500-1505. The beautifully illuminated manuscript contains 93 of the most virtuosic, florid, and complex motets in all the Renaissance. Each motet is substantial, at least 15 minutes in duration, based on text dedicated to the Virgin Mary. The Salve Regina, a Marian antiphon, was one of the most popular texts for musical setting in Tudor England. Cornysh composed the motet for the men and choirboys who sang before the king. Cornysh’s setting for five voices is regarded as one of the best works from the Eton Choirbook, and it is what inspired Gabriel Jackson’s Salve regina 2.

John Tavener (1944-2013) was raised Protestant, but interested in Catholicism. He eventually joined the Russian Orthodox Christian faith, where he developed his own unique composition voice as an Orthodox composer, employing a slow, almost minimalist unfolding of melodic material.  Tavener’s Magnificat and Nunc dimittis
were commissioned by Stephen Cleobury and the Choir of King’s College, Cambridge, and was first performed in King’s College Chapel in 1986. Tavener borrows  the use of a drone underneath a melody from Greek Orthodox music. In the Magnificat, an Eastern Orthodox hymn or “troparion” is inserted after each verse of the text, and each iteration of the melody is sung in richer scorings than the previous time, culminating in a sonorous, full-voiced refrain for the troparion. The Nunc dimittis is melodically simpler and mellow in comparison but enjoys the same colorful sound.

Gabriel Jackson (b. 1962), the main course of this program, is one of Britain’s most popular contemporary composers.  Jackson is known for his choral liturgical pieces, which are sung by Britain’s leading cathedral and collegiate choirs. He evokes a variety of styles to create a distinctly modern sound, parts of his music referencing Josquin, Tavener, and even Stravinsky. Jackson, the son of a clergyman and former chorister at Canterbury Cathedral, grew up in the Anglican church; however, he doesn’t consider himself to be a conventional believer—somewhat unexpected, considering his liturgical music output. Salve regina 2 is one of his most substantial compositions and  harks back to the Renaissance, specifically Cornysh’s Salve Regina. Jackson captures the florid and ornate nature of Cornysh’s setting and goes a step further, sprinkling in subtle, Stravinsky-like rhythmic textures underneath smooth chordal writing. Structurally, both settings are similar, the text “Salve” functioning almost like bookmarks denoting the end of one section and the beginning of the next. Jackson makes use of a compositional technique from 16th- century English church music called the “gimel.” The gimel indicates that a single part divides to showcase complex and interesting part-writing. In Salve regina 2, the gimel involves two solo sopranos and two altos singing the text “Lady! thy goodness.” The effect is heightened with a change of meter and language. Ave Maria (2004) is another demonstration of Jackson’s contemplative style through the setting of this popular text. Upper and lower voices are in a musical conversation throughout the piece while navigating through unexpected changes in key and texture, typical of Jackson’s style. Two shorter pieces, To Morning (2007) and Song (I gaze upon you) (1996), demonstrate Jackson’s sensitivity to text by capturing the rhythmic nature of poetry for a timeless, yet effective, expression of the text.