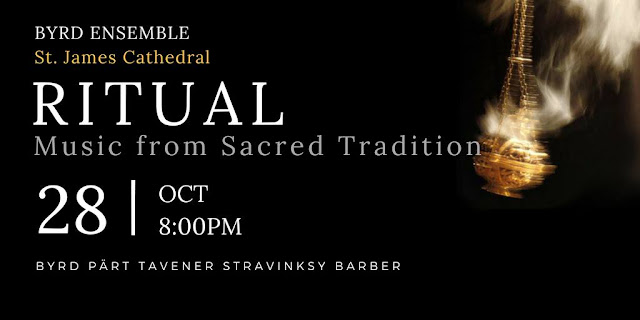 This program explores sacred music from the Eastern and Western Christian traditions featuring Anglican and Catholic motets by Renaissance greats—Byrd, Palestrina, and Gibbons—complemented by the Eastern style of Tavener, Stravinsky, and Pärt. All of the composers, with the exception of Palestrina, Barber, and Gibbons, endured an incredible spiritual struggle; Byrd's longing for the return of Catholicism in Protestant England, Pärt's musical soul searching through periods of contemplative silence, Tavener's conversion, and Stravinsky's return to the Russian Orthodox faith no doubt had a spiritual effect on their musical output. Despite the fact that the motets were written over the span of 500 years, each one of these masterpieces shares a profound sacred ethos that transcends time.

England endured religious and political turbulence in the 15th and 16th centuries. Composers had the difficult task of adjusting to whatever musical style the church was enforcing at the time. None was better than Thomas Tallis, teacher of William Byrd (1540–1623), who composed competently under four successive monarchs. Luckily for Byrd, the situation in England had settled somewhat by his tenure. Byrd’s main challenge was composing for a Protestant church as a devout Catholic. The new Protestant service demanded that the music clearly communicate the meaning of the text. Composers often used chordal textures and set text in the vernacular to fulfill the new musical demands. The Catholic tradition favored slightly more complex music set to Latin texts and a polyphonic texture. Byrd’s music struck a unique balance between the two traditions, though many believe that his music reflects his desire for the return of Catholicism in veiled terms. Byrd’s Magnificat comes from his setting of the Great Service—the Anglican celebration of Matins, Evensong, and Communion. While the piece is “great” indeed, in the 16th century “great” did not mean excellent, but “large.” Stylistically, the Magnificat is a perfect example of a balance of the two traditions—a predominantly polyphonic texture with deliberate use of homophonic moments to bring out the message of the text in English.

We hear Byrd’s genius at the young age of 19 or 20 when he wrote the two magnificent psalm motets which conclude each half of the program, Domine quis habitabit and Ad Dominum cum tribularer. Domine, a setting of Psalm 14, only survives in a single source from the 1590s in score format instead of in partbooks, unusual at the time. The motet is scored for nine voices with three bass parts of equal ranges. The opening minor 6th interval is exotic, and the rest of the motet continues mostly in imitation, maintaining a dense, polyphonic, nine-part scoring throughout. Ad Dominum, a setting of Psalm 120, is scored for eight voice parts. Like Domine, Ad Dominum continues in straightforward polyphonic fashion but with an incredible gathering of momentum for a powerful ending on the text: “With those who hate peace I was a peacemaker: when I spoke to them, they battled me without cause.”


For six years in a row, Estonian composer Arvo Pärt (b. 1935) has been given the title of the “world’s most-performed living composer.” What preceded his success was a long musical and spiritual struggle that began at an early age. After some time experimenting in neoclassical styles, Pärt decided to use Schoenberg’s twelve-tone technique and serialism in his compositions—this displeased the Soviet establishment enough to ban his early works. Pärt, not pleased with his output, went into several periods of contemplative silence, during which he studied choral music from the 14th, 15th, and 16th centuries. His biographer, Paul Hillier, says, “He had reached a position of complete despair in which the composition of music appeared to be the most futile of gestures, and he lacked the musical faith and willpower to write even a single note.” Pärt spent years immersing himself in Renaissance vocal music and, more generally, Western music. Out of this period of musical soul-searching came what he calls his “tintinnabuli style” where one or more instrumental or vocal parts, basically melodic in construction, are placed against one or more additional parts projecting arpeggiations of a major or minor triad, the latter evoking “tintinnabulation” or the ringing of bells. Tribute to Caesar (1997), a setting of the Gospel according to St. Matthew, shows only subtle hints of the tintinnabuli technique.

John Tavener (1944–2013) was raised Protestant, but was interested in Catholicism. He eventually joined the Russian Orthodox Christian faith, where he developed his own unique composition voice as an Orthodox composer, employing a slow, almost minimalist unfolding of melodic material. Tavener’s Funeral Ikos is a setting of text from the Orthodox service for the burial of priests. Tavener’s interest in chant is obvious in the unmetered solemn verses, but the “Alleluia” refrain is distinctly his. The Lamb (1982), a short carol based on a poem by William Blake, was composed in one afternoon and sent to the Choir of King’s College, Cambridge to be included in their annual Lessons and Carols service. The music is built on a simple melodic idea (opening G-B-A-F#-G) and its inversion (G-Eb-F-Ab-G), resulting in a remarkably spare, but bleak sound. Contrasting the melodic inversions are homophonic statements that sound comforting and melancholic in comparison—reminiscent of the “Alleluia” refrain in Funeral Ikos.

Igor Stravinsky's (1882–1971) ballet music made him an international star. By the 1920s, his compositional style shifted from the “primitive style” of the ballet music to neo-Classicism, a style more tightly controlled and harmonically grounded. He once said “the more constraints I put on myself, the freer my compositions.” Shortly after World War I, Stravinsky underwent a religious re-conversion. As a boy, Stravinsky rejected the Russian Orthodox church, but in September 1925 Stravinsky reports to have experienced a miracle. While playing his own sonata one evening, he felt a miraculous healing of a painful abscess. On Easter the following year, Stravinsky rejoined the Orthodox faith, which fueled his choral compositions to the end of his life. One of the first pieces he wrote following his recommitment to the church was a four-voiced choral setting of the prayer Отче наш (Our Father), composed in 1926 to commemorate his return to the Orthodox Church. Stravinsky wrote the first version of this motet in Church Slavonic, the Russian Orthodox dialect that he considered the true "language of prayer." The piece is barely a minute and a half in performance and was intended for the Orthodox liturgy. Stravinsky maintains a strong sense of a tonal center throughout, while deliberately avoiding functional harmony, characteristic of the neo-Classical style. Strong beats of the text always fall on downbeats within the shifting metric patterns.

Italian composer Giovanni Pierluigi da Palestrina (1525–1594) was the most important composer of the Counter-Reformation. He was probably a choirboy at the church of Santa Maria Maggiore in Rome and later served there as maestro di cappella for ten years from 1561. Palestrina’s Magnificat primi toni for eight voices was copied into a large choirbook for the papal choir around the late 1580s and was not intended for public use. He composed the work for two choirs, which come together rarely for maximum impact; such as “omnes generationes” (all generations) and for the end of the work. Unlike Byrd’s setting of the Magnificat, Palestrina’s setting was not composed for Anglican Evensong, but rather for use in the Catholic office of Vespers.

Samuel Barber (1910–1981), the only American representative of the program, is best known for his Adagio for Strings from the second movement of his String Quartet, Op. 11. In 1967, Barber composed Agnus Dei, a choral arrangement of the Adagio. Many describe the eight-minute work as an example of  sentimental Romanticism, teasing out incredible servings of nostalgia. One can detect a faint essence of the Renaissance in the melismatic texture (many notes on one syllable), interweaving of contrapuntal lines, and through the ebb and flow nature of the piece.

English composer Orlando Gibbons’s (baptized 1585–1625) Hosanna to the Son of David is a jubilant setting of the Gospel story of the triumphal entry into Jerusalem. Christ is taking possession of his kingdom, with crowds of children waving palm branches, crying "Hosanna to the Son of David!" Hosanna, an anthem for six voices, may have originally been composed for a ceremony associated with the English monarchy. The exuberant music and the textual allusion to Christ the King would have justly honored a divine ruler.

Described as “pure and radiant” (Gramophone), “immensely impressive” (Early Music Review), and “rich, full-voiced, and perfectly blended” (Early Music America), the Byrd Ensemble is garnering international acclaim for its performances and recordings of chamber vocal music, particularly Renaissance polyphony. The Byrd Ensemble, directed by Markdavin Obenza, is a Seattle-based professional ensemble made up of 10 to 12 singers from the Pacific Northwest. The group presents its annual concert series at St. Mark’s Cathedral in Seattle. The Byrd Ensemble is a nonprofit organization.

Since 2004, the ensemble has performed in the greater Seattle area and has toured across the United States, presenting concerts for the Gotham Early Music Scene in New York with Peter Phillips (director of the Tallis Scholars) and the Boston Early Music Fringe Series. In 2014, the Byrd Ensemble was one of sixteen groups—the only ensemble from the United States—chosen to sing at the London International A Cappella Choir Competition and worked with Peter Phillips, Mark Williams, and John Rutter, who described the ensemble as “a fine group that has achieved an enviable standard of tuning, blend, and ensemble.” The Byrd Ensemble presents an annual subscription series at St. James Cathedral in Seattle and regularly performs in Portland, Oregon.

The Byrd Ensemble became part of the Scribe Records label in 2011 and has since produced six records—four of which feature Renaissance polyphony— and have been reviewed by major early music publications: Early Music America, Gramophone and Early Music Review. Our Lady: Music from the Peterhouse Partbooks (2011) featured reconstructions by musicologist Nick Sandon of music by lesser-known English Renaissance composers—Pasche, Merbecke, and Ludford—and included two world-premiere recordings. In the Company of William Byrd (2012), Music for the Tudors (2015), and Music of the Renaissance: Italy, England & France (2016) featured more mainstream Renaissance composers Tallis, Sheppard, Byrd, and White. In 2014, the Byrd Ensemble was included in the international edition of Gramophone Magazine for its recording of works by Estonian composer Arvo Pärt.
​​
ARTISTIC DIRECTOR MARKDAVIN OBENZA has dedicated his career to music. In addition to the Byrd Ensemble, Markdavin is also Director and founder of Seattle-based chamber choir Vox16 and Producer for Scribe Records, an independent record label. He is an active freelance singer who performs with the Byrd Ensemble and has performed with the Tudor Choir, Early Music Vancouver, and members of the Tallis Scholars. He is the Director of Choral Music at Trinity Parish Church in Seattle, WA.