A prelude to the Christmas season: Britten, Holst, and Howells 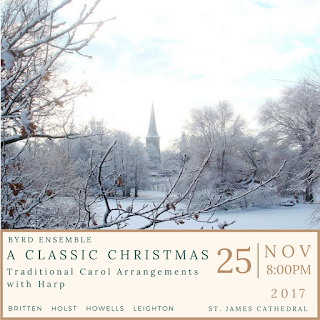 SINCE 2009, we have been one of the first area choirs to usher in the holiday season with our Christmas program Thanksgiving weekend. (Some say it’s too early and that we must be on the Macy’s calendar). After nine years it is starting to feel like a tradition, a prelude to the festive Christmas season ahead.

As I constructed this English Christmas program, I became aware of the importance of tradition at this time of year and the feelings of nostalgia and sentimentality that accompany it. On a personal level, many of the singers, including myself, have grown up singing these carols in our respective children’s choirs—I bet some of us have Britten’s A Ceremony of Carols memorized!

The composers no doubt felt similarly. Mid-20th century English composers paid homage to their Renaissance predecessors through their writing style and with great respect to the preservation of the carols. We see this in Howells’s penchant for polyphonic textures, Holst’s preference for uncomplicated carol settings, and Britten’s use of chant. And of nostalgia? I dare you to find something more nostalgic than Darke’s In the Bleak Midwinter. We are honored you are here to share the start of your holidays with us, and we thank you for supporting our tradition.

The procession Veni, veni, Emmanuel comes from the “O Antiphons,” a set of Magnificat antiphons sung at Vespers over the last seven days of Advent. The O Antiphons date back to the 9th century and anticipate the birth of Jesus.

Harold Darke (1888—1976) became famous for his Monday lunchtime recitals held at St. Michael's Church, Cornhill where he gave more than 1,800 performances over his fifty-year service. Darke’s brilliance as an organist and expertise leading the St. Michael’s Singers prepared him well for his appointment in 1941 as organist of King’s College, Cambridge, during the absence of Boris Ord, who was called out to war. Darke is remembered for his much-loved In the Bleak Midwinter, a Christmas carol based on a poem by the English poet Christina Rossetti. The poem became a Christmas carol after it appeared in The English Hymnal in 1906 with a setting by Gustav Holst. In 1909, Darke composed this setting, which was named the best Christmas carol in a poll of some of the world’s leading choirmasters in 2008.

Kenneth Leighton (1929—1988), the most recent composer on the program, comes from the English tradition represented by Vaughan Williams, Finzi, Howells, and Walton. (If you are wondering why I have excluded Leighton’s much more popular contemporary John Rutter from an English Christmas program, it is not because there is a lack of good Rutter carols, but because Leighton’s music pairs much better with the other English masters on the program). Leighton composed his most popular carol Lully, lulla, thou little tiny child—a setting of the Coventry carol—in 1948 as a 19-year old Oxford student. The text describes the Massacre of the Innocents, when the ruler of Judea, Herod, ordered the execution of all male infants of Bethlehem, in hopes to kill the child claimed by the Magi to be the “King of the Jews.” Leighton creates a dark mood through a repetitive instances of “Lully, lulla” that does not commit itself to a major or minor tonality—all of this underneath a haunting Soprano solo that soars above the choir.


English composer and organist Herbert Howells (1892-1983) is known for his large output of Anglican church music. He started composing early in life, studying under Charles Stanford at the age of eighteen. Howells’s colorful sound hearkens to the style of French impressionism—no wonder some call him an English Debussy. Howells composed Long, long ago poems by John Buxton, dedicated to the Lady Margaret Singers, Cambridge. Long, long ago, a carol-anthem, like most of Howells’s music, is not so much about distinctive musical themes. Instead, he uses a colorful musical atmosphere, a kind of scape as a vehicle for the words. Howells, a master of the musical art of deception, resolves tension in unexpected ways.

Vaughan Williams described his colleague Gustav Holst (1874—1934) as “the greatest influence on my music.” Holst also had a strong influence on the music of William Walton and Benjamin Britten. Holst, a composer for the people, believed that it was the composer’s duty to provide music for practical purposes—festivals, ceremonies, hymns or Christmas carols. Four Old English Carols (1907) demonstrates Holst's concern for economy. He sets the four traditional carols modestly and without too much musical complication that would obscure the simplicity of each carol. Holst’s Christmas Day, a “Choral Fantasy on Old Carols,” was composed in 1910 for the amateur singers of Morley College, where Holst had been teaching since 1907. This choral “fantasy” features a number of well-known carols—God Rest You Merry Gentlemen, The First Nowell, and Good Christian Men Rejoice.

The centerpiece of the program is Benjamin Britten’s (1913—1976) A Ceremony of Carols (1942), a collection of short pieces based on carols written in the 15th and 16th centuries. Britten wrote A Ceremony of Carols while on a transatlantic voyage from the United States to England. While stopped in Nova Scotia, Britten obtained a copy of “The English Galaxy of Shorter Poems,” a set of lyrical poems in Middle English, where he found the text for the work.

With its popularity among children’s choirs, it may be surprising to some that A Ceremony was originally conceived for a female choir. The Fleet Street Choir (women’s choir) gave the first performance of the initial seven movements in 1942. It was only after hearing several memorable performances of the work by a Welsh boys' choir that Britten stated his preference for boys’ voices. Originally, Britten composed seven movements out of the eleven as a set of unrelated songs. In 1943, he decided to unify the work through the addition of four movements: “Procession” and “Recession” that frame the cycle, based on the antiphon chant from the Christmas Eve Vespers; “That yongë child” for solo soprano and harp; and the new “Interlude” for solo harp.

With this cycle, Britten saw a chance to write music that would blossom in a church or cathedral. The canonic writing of “This little Babe” creates an exciting effect. Three voices sing the same melody but a beat apart, resulting in an echo effect reminiscent of a reverberant cathedral—no doubt the results will be more dramatic in the acoustics of St. James Cathedral. “In freezing winter night” also uses canonic writing, but more to create an atmosphere. At the center of A Ceremony lies the “Interlude” for solo harp which is also based on plainchant. The “Interlude” has a bell-like quality which is also heard in “Wolcum Yole!” and “Adam lay i-bounden.” Britten was not alone in his fascination with bells—both Rachmaninoff and Stravinsky, influenced by music from the Russian Orthodox Church, professed a lifelong fascination with bells.