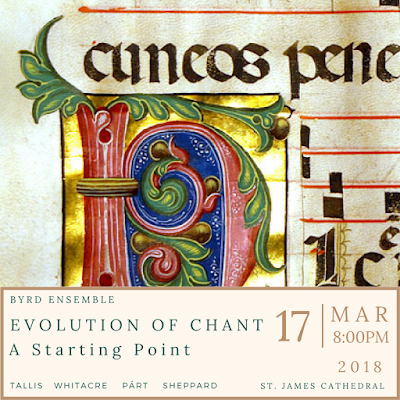 Chant is timeless. At bottom, it is a simple melody unrestricted by bar lines and time signatures; however, upon reflection on the last thousand years of music, we know it is much more than that. Not only was chant our musical starting point, it is the foundation of Eastern and Western music. Renaissance composers such as Tallis and Sheppard frequently used chant as the basis for polyphonic composition, while more contemporary composers Pärt and Tavener took inspiration from it. Others like Tavener and Whitacre also employ chant but with a modern harmonic flavor. Just as music has evolved from it, we can also hear chant itself transformed throughout the ages.

EVOLUTION OF CHANT: A Starting Point

Thomas Tallis (1505—1585) had the hard task of composing under four successive Tudor monarchs (Henry VIII, Edward VI, Mary I, and Elizabeth I) during a period of political and religious instability. While the Protestant Reformation flourished under the first two Tudors (Henry VIII and Edward VI), Mary I, a devout Catholic determined to crush the Protestant faith, restored the Catholic Rite to the English church during her brief reign. The church’s return to Catholicism called for a shift in compositional style with the return of Latin and polyphonic textures. It is possible Tallis secretly welcomed the return of Catholicism. During Mary I’s short time, he produced a large number of works for the principal feast days of the liturgical year, including Loquebantur variis linguis and Videte miraculum, written for Pentecost and The Feast of the Purification respectively. Tallis's Loquebantur (The Apostles spoke in many tongues) features quick points of imitation in a dense seven-part texture, depicting "many tongues." Videte depicts the birth of Jesus. All of the Renaissance pieces on the program are choral responds based on chant in the tenor part, and they alternate between full-choir polyphonic and chant sections. A respond is a musical structure where
parts of the music are repeated, usually taking the form ABCdBCdC (d=chant).

We know only a few things about English composer John Sheppard (1515—1558). He was employed at Magdalen College, Oxford 1543—1548 and the Chapel Royal 1552—1560. Unfortunately, much of Sheppard’s music has survived incomplete; however, because it was often the chant part that was missing (in the tenor) it has been possible to reconstruct his music. This is the case for Reges Tharsis, a responsory for the Feast of Epiphany scored for SSAATB, Sheppard’s favorite scoring for maximum harmonic punch.

Eric Whitacre (b. 1970), America's most popular choral composer, wrote Saint-Chapelle (2013) for the 40th Anniversary of the Tallis Scholars. Sainte-Chapelle tells a story of a girl’s experience standing inside Sainte-Chapelle, a Gothic royal chapel at the center of Paris. The piece illustrates her awe of the stained glass windows filling the chapel, creating a jewel-box space flooded with colors of yellow, burgundy, and green from all directions. Whitacre uses chant to tell the story. The piece begins with only men’s voices, which are joined by the women at “Sanctus,” functioning as a refrain.


Hildegard of Bingen (1098—1179), writer, composer, and philosopher, is considered to be the founder of scientific natural history in Germany. Hildegard left behind an enormous amount of illuminated manuscripts, scholarly writings, and songs written for her nuns to sing at their devotions. Hildegard is one of those rare identifiable composers in the history of Western music; most medieval composers were anonymous. Unlike the simple one-octave chants at the time, Hildegard’s melodies sound almost improvisatory: they are freer, ornate, and large- ranging. Her love for nature is reflected in the two Marian chants: O viridissima virga (O branch of freshest green) and O virga ac diadema (O branch and diadem).


For the seventh year in a row, Estonian composer Arvo Pärt (b. 1935) has been given the title of the “world’s most performed living composer,” according to “Estonian World.” After some time experimenting in neoclassical styles, Pärt decided to use Schoenberg’s twelve-tone technique and serialism in his compositions, displeasing the Soviet establishment enough to ban his early works. Pärt, not pleased with his output, went into several periods of contemplative silence, during which he studied choral music from the 14th through 16th centuries. His biographer, Paul Hillier, says, “He had reached a position of complete despair in which the composition of music appeared to be the most futile of gestures, and he lacked the musical faith and will-power to write even a single note.” Out of this period of musical soul-searching emerged a unique compositional style that informed his music beginning in the 1970s—tintinnabuli (bell-like). The tintinnabuli style is a simple compositional technique that restricts the number of possible harmonies. Imagine the harmonies generated by playing a major scale in the left hand and its equivalent arpeggio on the right.


Calling back to the ancient styles of plainchant, Pärt uses drones. The solo soprano part in the Magnificat holds the pitch C, providing the tonal center for the piece. Pärt’s setting of the Magnificat, through varying note lengths, repetition, and no sense of meter, establishes a sense of timelessness. The half-step dissonances are sprinkled throughout alongside the rich harmony and pulls us into a state of contemplation and introspection. I am the true vine was composed in 1996 for the 900th anniversary of Norwich Cathedral in England. The work offers a twist on Pärt's tintinnabuli technique. Syllables of text are dispersed among the parts in such a way that each part is often completing another part’s sentence or word. Also, the distribution of the melody among the parts—bass to soprano, back down to Bass—resembles the vine depicted in the text. The Seven Magnificat Antiphons (1988; revised 1991), marks only the second time that Pärt set a German text. Perhaps the fact that it was commissioned for the Radio Chamber Choir in Berlin, a group whose broadcast performances reached audiences far and wide, suggested that the vernacular language would be the most appropriate choice. Each of these texts, in its normal liturgical context, functions as the antiphon to one iteration of the Magnificat, sung at Vespers on each of the seven evenings preceding Christmas Eve. In Pärt’s composition, these texts are set simply as a series of seven movements.


John Tavener (1944-2013) and Pärt are often described as mystic minimalists—a category (sometimes used pejoratively) to describe late twentieth-century composers who focus on religious themes. Like Pärt, Tavener developed his compositional voice after joining the Russian Orthodox Christian faith. His mother died in 1985, and he was unable to compose for a short time after. He eventually found the inspiration to write Two Hymns to the Mother of God (1985) in her memory. The melodies and harmonies recall both Western and Eastern Orthodox music. The first hymn comes from a text of St. Basil in praise of the Mother of God. Tavener sets it for double chorus in a strict canon, the second chorus repeating the material of the first, exactly three beats behind, creating a blurring effect. The second text is from the vigil service called the Dormition (Falling Asleep) of the Mother of God, an important observance in the Orthodox faith. The tenor part carries the main melody while the remaining voices sustain triads. Eventually all voices converge in a rich succession of consonant chords for the text: “O ye apostles, assembled here from the ends of the earth, bury my body in Gethsemane: and Thou O my Son and God, receive my Spirit.”
Posted by Markdavin Obenza at 9:38 AM