Messiah: How it went 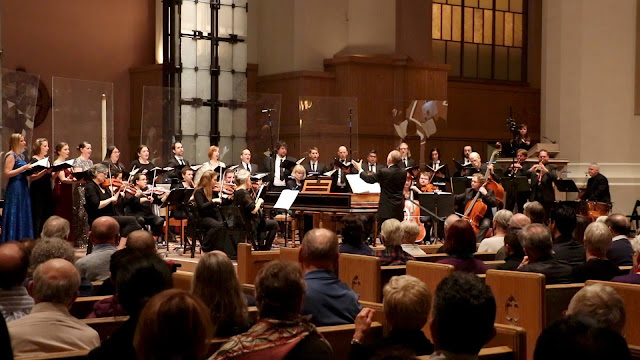 When Gus Denhard (Executive Director of Early Music Seattle) and I talked about Byrd Ensemble and Seattle Baroque Orchestra working together again on a larger piece, I knew it had to be Messiah. It had been ages since a period version with a professional choir had been performed in Seattle and it seemed like a great time to test the local interest in it. It’s no cheap undertaking—this was going to cost nearly $40k, and that’s a steal (we were saving money by not hiring outside soloists).

VENUE
The timing of the Messiah performances were expected to coincide with the completion of the Town Hall renovation, so it also seemed like an opportunity to show off the new building. Unfortunately the renovations were not completed in time and we had to find another venue. Thankfully, St. Mark’s Cathedral was able to accommodate us fairly late in the game. Town Hall is a better acoustic for Baroque music, but changing the venue to St. Mark’s allowed us to draw attention to the history of Seattle’s period Messiah tradition which began at the cathedral. Our Friday show was at Bastyr University, a popular recording venue for movie soundtracks and games. The sound here is crystal clear and outside noise is minimal. The only drawback is that you have to make your way up to Kenmore in Friday rush hour traffic. We were hoping another presenting organization would present us on Sunday for a matinee show, but alas.

REHEARSAL WORKFLOW
Rehearsals for collaborative projects like this often don’t start until the week of the concert. Players are hired for the entire week (not per service), which puts pressure on presenting organizations to cram in as many performances as possible in order to make the money back—you aren’t making money rehearsing! The choir is not paid for the whole week, but per service. Singers had three rehearsals before the first concert. Because the Messiah is a very familiar work among singers, we probably only needed two rehearsals. Soloists had an additional 2 rehearsals—they probably only needed one.


CHOOSING SINGERS
This is one of my greatest pleasures. Staffing a program is incredibly important and has everything to do with its artistic success. I couldn’t simply draw from my standard Renaissance roster on this one. I needed to hire singers that can both project, but also cope with fast Baroque runs. We needed loud, but agile voices.

Because the soloists were chosen from the choir, this allowed me to assign arias to specific voice types. For example the aria “Rejoice, greatly,” needed someone who could lay waste to the brutal string of runs, “He shall feed his flock” required a slightly heavier sound, and “I know that my redeemer liveth” is best delivered with a clarity of sound that communicates sincerity. We were fortunate to have the variety of singers in the choir to meet the demands of each aria.

TEMPOS
We heard rumors that the director Alexander Weimann likes his Messiah fast - as though he has 10pm dinner reservations. They were right (though not sure about the dinner reservations...) The performance took about 2.5 hours, and that included intermission! As a singer, when you have to sing that fast you have to phrase differently. Trying to give each 16th note equal weight is suicide. Instead you have to save the weight for the notes on the main beats—they function like anchors.

On a macro level, a faster tempo not only gets you out in time for a drink before bedtime, but prevents the lulls, or loss of momentum that a Messiah can have. That moment where people start yawning...

TRADITION?
I don’t have the revenue figures yet, so it’s too soon to say whether this will be a tradition. An April, Easter season production over December felt right. We didn’t have to compete with the other myriad of Messiahs and sing alongs that happen around Christmas, or have trouble finding singers that are often over committed (and sick!) in December.

It does seem like there is genuine interest in this kind of Messiah—St. Mark’s Cathedral was nearly at capacity for our Saturday concert. The Friday show at Bastyr University not as much, though I bet a Sunday matinee performance would have done much better.

Many thanks to those that came, and to those that didn’t come but dealt with me spamming your feed with Messiah content! We hope to offer this again in the future.
Posted by Markdavin Obenza at 1:27 PM