Monuments of the Renaissance 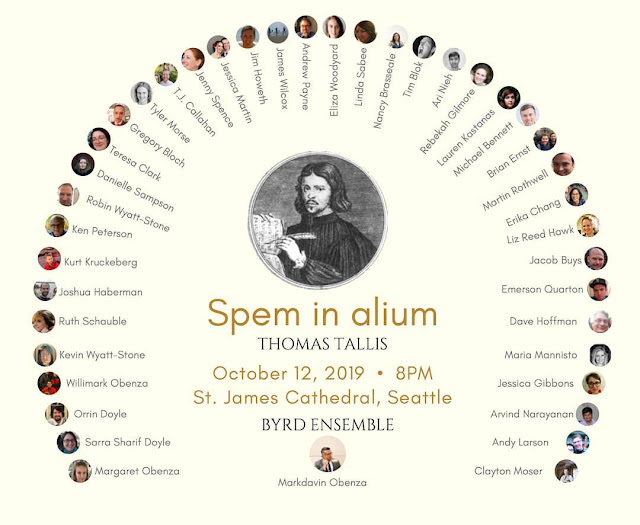 Renaissance polyphony has survived the test of time. While the text is mostly sacred, the music possesses an inherent beauty that enchants listeners from all backgrounds. Nothing compares to the sound of human voices in their purest form, without accompaniment, singing this ancient music—it delivers a profound sense of human achievement.
For tonight’s program, we are excited to share with you a selection of the most complex, introspective, and soul-wrenching works from the period.
Thomas Tallis (1505–1585) had the hard task of composing under four successive Tudor monarchs (Henry VIII, Edward VI, Mary I, and Elizabeth I) during a period of political and religious instability and was able to adapt his musical style to meet their demands. Henry VIII wanted to divorce Catherine of Aragon so he broke away from the Catholic church in 1534, paving the way for the Protestant Reformation, which favored simpler forms of writing and introduced sacred music in the vernacular. The Reformation flourished under the first two Tudors (Henry VIII and Edward VI) until Mary I’s accession in 1553. Mary I, a devout Catholic determined to crush the Protestant faith, restored the Catholic Rite to the English church during her brief reign, and the compositional style reverted back to the more elaborate and florid writing prevalent earlier in the century.
England’s return to Catholicism called for a shift in compositional style, and Latin and polyphonic textures returned to prominence. It is possible Tallis secretly welcomed the return of Catholicism. During Mary I’s short time, he produced a large  number  of  works  including  a   Pentecost    responsory Loquebantur variis linguis. Tallis weaves an intricate web of polyphony around the chant in the tenor part, with the remaining six parts all depicting the apostles speaking in tongues.
Tallis’s two settings of the Lamentations of Jeremiah are among the most beloved works of Tudor polyphony. While both settings are of readings for the Maundy Thursday liturgy, we do not know if Tallis intended them for liturgical performance or private, devotional use. The musical style suggests they were composed during Elizabeth I’s reign. Tallis captures an incredibly heavy, solemn mood in his settings which leaves the listener haunted. We are performing Tallis’s second setting of the Lamentations.
In jejunio et fletu was first published in 1575 as part of Cantiones Sacrae, a large collection of sacred motets composed by Tallis and his pupil William Byrd. Scored for lower voices, Tallis creates a very somber sound in this penitential motet for Ash Wednesday. The text describes priests “fasting and weeping,” and, more pertinently, begging the Lord to spare His people from having their (Catholic?) heritage destroyed.


The centerpiece of the program is Tallis’s crowning achievement, Spem in alium. Tallis composed the 40-part tour de force in 1570 for eight choirs of five voices each. According to a letter written by Thomas Wateride in 1611, a song of 30 parts was sent from Italy to a music-loving duke in England, who asked if an “Englishman could sett as good a songe.” Tallis took up the challenge and set the text of the Matins response “Spem in alium” to a total of 40 parts.


Supposing the “30” to be a mistake, the Italian song that inspired Tallis is likely to have been the 40-part motet Ecce beatam lucem or Missa sopra Ecco si beato giorno, both by Alessandro Striggio. Striggio probably met Tallis while on a European tour that stopped in London in June 1567.
The motet is laid out for eight choirs of five voices (soprano, alto, tenor, baritone and bass). We are performing the motet as Tallis likely would have intended, with singers standing in a horseshoe shape. Beginning with a single voice from the first choir on the far left, other voices join in imitation, each in turn falling silent as the music moves around the eight choirs. All forty voices enter simultaneously for a few bars, and then the pattern of the opening is reversed, with the music passing from choir eight to choir one. There is another brief full section, after which the choirs sing in antiphonal pairs, throwing the sound across the space between them. Finally all voices join for the culmination of the work.
“Tallis is dead and music dies,” lamented William Byrd (1540–1623), his pupil and later colleague. Byrd obtained the prestigious post of Gentleman of the Chapel Royal in 1572. Though he was not required to write in as many styles as Tallis, since the political and religious situation in England had settled somewhat by Byrd’s tenure, he was an impressive successor to his teacher. Byrd’s musical challenges were more personal—he spent his life composing for a Protestant church as a devout Catholic. The new Protestant service required a compositional style that clearly communicated the meaning of the text to the congregation, which amounted to a primarily chordal texture with English language text. The Catholic tradition still favored Latin texts and the music was more elaborate in style. Byrd’s music was a compromise and sat right in the middle—simpler than contemporary Catholic music and more complex than his Protestant colleagues’ compositions. Despite this apparent compromise, many believe that his music often reflects his desire for the return of Catholicism in veiled terms, particularly in Tristitia et anxietas.
Unfortunately, we know little about Scotland’s greatest Renaissance composer, Robert Carver (1485–1570). Carver was a Scottish Canon regular—an ordained priest who lives in a community with other canons—who spent much of his life at Scone Abbey. They followed a set of rules that emphasized a life lived together under the vows of chastity, poverty, and obedience. By examining examples of Carver’s signature found in a rediscovered charter book for the abbey, we know he was also the scribe for the Carver Choirbook, which contains all of his surviving compositions including the 19-part motet O bone Jesu. Some historians believe it was written for James IV, who atoned constantly over the course of his life for trying to overthrow his father, James III (who eventually was murdered by a group of rebels). James IV never got over his guilt for being involved and every year during Lent wore an iron chain garment around his waist, next to the skin, adding weight every each year. Some think James IV commissioned O bone Jesu as part of that atonement. Opening delicately with only two voices, Carver expands to incorporate the entire 19-voice choir in the span of only 30 seconds. This opening which evokes images of a sunrise, is one of the most beautiful moments in the repertoire.
Italian composer Andrea Gabrieli (1532–1585) was the first internationally renowned member of the Venetian School of composers. In 1566, Gabrieli was chosen for the post of organist at St. Mark's Basilica, one of the most prestigious musical posts in northern Italy. Working in the unique acoustic space of St. Mark's, he was able to develop his unique, grand ceremonial style, which was enormously influential in the development of polychoral style. Gabrieli’s setting of the Magnificat for triple choir represents only the beginning of the Venetian exploration of the polychoral style.
The polychoral style eventually made its way to Spain, influencing composers such as Alonso Lobo (1555–1617), though Lobo never used more than two choirs. (The Gabrielis often wrote for as many choirs as there were choir lofts at St. Mark’s). Lobo was influential far beyond Spain and was considered to be one of the finest Spanish composers, second to Tomás Luis de Victoria.
Lobo’s best known work, Versa est in luctum, was written for the funeral of Philip II in 1598 at Toledo Cathedral. While the six-part motet is set to text associated with a Requiem Mass, he did not write a complete setting. The stunning motet, filled with beautiful, cascading lines, captures the despair of the text and showcases why Victoria considered Lobo to be an equal.
We want to thank everyone for supporting us through the years. It has been such a privilege to explore the depths of this gorgeous music over 15 years of performance and recording. This journey has been more fulfilling than we could have imagined, and we could never have embarked on it without you.